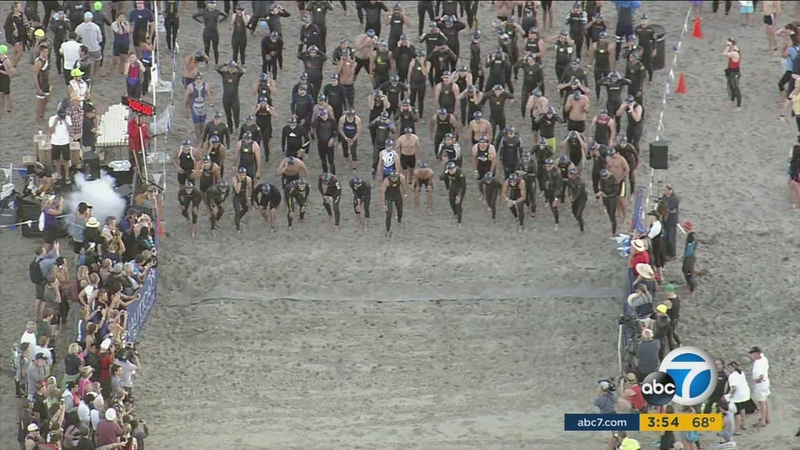 MALIBU, Calif. (KABC) -- Dave Lane is a cancer survivor of 28 years, but said he will never take his health for granted.

"It changes your perspective on life. You don't sweat the little stuff anymore," Lane said. "I had just completed a 100 mile century triathlon race three weeks before I was diagnosed with cancer."

Lane has completed three triathlons this year, but this will be his first Nautica Malibu Tri.

The competition is a star-studded event at Zuma Beach where 5,000 contestants come to run, swim and cycle.

There are those coming to achieve a large fitness goal, for others, they've been touched by a friend or family member who has had cancer.

Their goal is to raise as much money and awareness for cancer research.

Holzberg said when he was diagnosed, his doctor made him set three goals: One was to complete the Nautica Malibu Triathlon.

"I got a cancer diagnosis at the age of 50. My world changed at that point," Holzberg explained.

After experiencing the pain of chemotherapy first hand, the former Disney Imagineer created "Infusionarium," a chemo center where children can pick interesting visuals to watch while going through treatment.

The center aims to help children heal in a more positive environment.

For competitor Sandra Andrades, the event is a way to remember her daughter Sophia who died from re-occurrence of neuroblastoma.

Andrades' "Team Sophia" has grown from two members to 140 in the past three years.

They ride for six angels and three warriors fighting cancer.

Yet the statistics on children's cancer are staggering.

"Forty six children will be diagnosed today with cancer and seven will pass away," said Andrades.