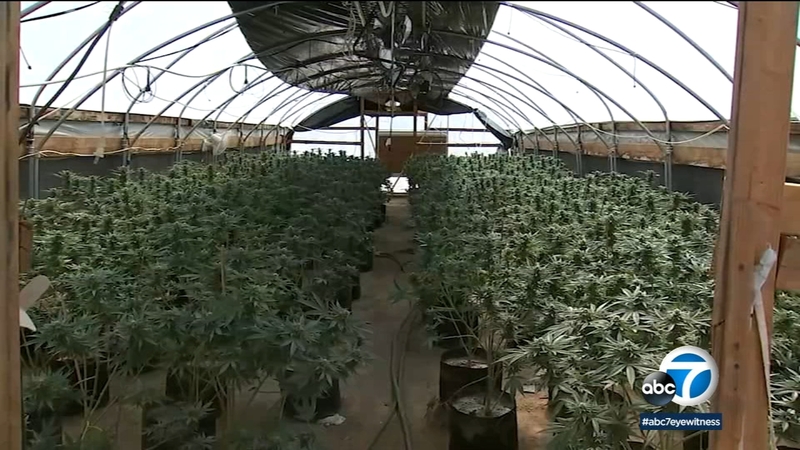 LASD cracks down on illegal marijuana grows in the High Desert

LANCASTER, Calif. (KABC) -- The Los Angeles County Sheriff's Department is on a mission to wipe out illegal marijuana grows and has made hundreds of arrests since the beginning of the year.

The department's investigative task force teamed up with the California National Guard's counterdrug task force, as well as the state Department of Fish and Wildlife to target and dismantle illegal grows in the Antelope Valley.

Eyewitness News was allowed to tag along during a raid carried out Tuesday at one of the grow sites in Lancaster. Choppers and trucks were used to haul away mounds of marijuana.

Agents not only found the plants, but also weapons and narcotics.

The effort to eradicate illegal marijuana grows in the area started roughly a year ago, netting the seizure of more than half a million marijuana plants, hundreds of arrests, over a hundred weapons and more.

Sheriff Alex Villanueva said in the first four months of the year, the same team has served a 160 marijuana-related search warrants and carried out over 100 arrests.

The sheriff added the task force will only get more aggressive in eradicating illegal grows in the High Desert.

"We're going to be here for a while," said Villanueva. "By the end of this whole operation, we're going to have knocked out the majority of all the illegal grows here in the High Desert."