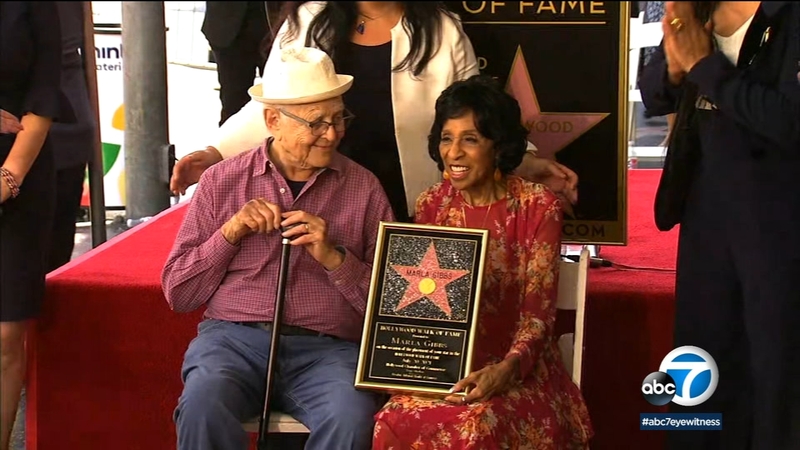 HOLLYWOOD, LOS ANGELES -- Marla Gibbs is a comedy legend, who created a bit of drama when she accepted her star on the Hollywood Walk of Fame Tuesday. The 90-year-old actress had a moment that literally stopped the show.

Gibbs was expressing her thanks when a moment of pause turned into a moment of concern when she stopped talking. Her daughter, Angela, had Gibbs take a moment, take a breath and cool down. Then the ceremony restarted.

Marla Gibbs was not about to miss this!

"I never thought it would happen, but here it is," said Gibbs. "I just got overwhelmed for a minute. I haven't been excited until this moment!"

Marla had reason to be excited. Her family was there, along with fans and friends and colleagues, including producer Norman Lear, the man who created the show that made her a star, "The Jeffersons."

"This glorious person, performer, actress made me laugh in parts of my body I didn't know existed," laughed Lear.

"Nobody would know my name if not for him," acknowledged Gibbs.

Many famous faces were on hand to celebrate Marla's big day.

"We have talked about this for years," said Vanessa Bell Calloway.

"We're standing on her shoulders. Because of her, we're allowed to dream and hope and achieve," said Starletta DuPois.

"I remember seeing Marla. I was like, 'I'm funny. I can do that also,'" said Kym Whitley.

"That's what we mean when we say she's our Betty White because there was somebody that looks like us and we could dream," said Sherri Shepherd.