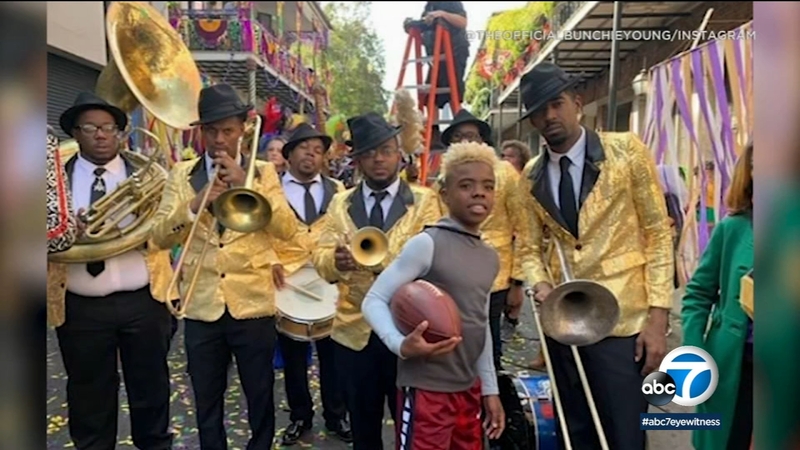 LOS ANGELES (KABC) -- It's not every day a 13-year-old stars in his own commercial, let alone a commercial guaranteed to be seen by millions of people on Super Bowl Sunday.

It was the commercial that kept us guessing until the very end, but by the time Maxwell "Bunchie" Young handed over the football at Hard Rock Stadium in Miami Gardens, everyone was scrambling to find out who he was.

"It was just so loud," said the star of the NFL 100 commercial about the Super Bowl crowd.

"And the players were looking up to see my Super Bowl commercial and it was really crazy," he added.

He says he even gained 10,000 Instagram followers since that moment. That's on top of the 30,000 or so followers he already had.

The 7th grader explained how the commercial took a few months as he traveled back and forth from New Orleans and Chicago for shoots and mum was the word.

Bunchie garnered enough attention to be named the 2017 Sports Illustrated SportsKid of the Year and a scholarship to play for the University of Illinois at Urbana-Champaign.

This is for a kid who doesn't even know where he's going to go to high school.

"That's more of a mystery than college," he says with a laugh.

It all seems like so much for a kid his age, but his dad, David Young, says they are a tight-knit family.

"We spend a lot of time together. And we talk. I keep that communication base with him," David said.

The focus is on working hard and then reaping the benefits of the sacrifices made, but his dad has a bottom line.

"I just wonder sometimes where God is leading us," David said. "He likes doing this. He likes doing the commercials, but it's like, hey, man as long as you keep God first. I just want you to be a successful man."

"Might be acting, it might be football, who knows? It might be something else, who knows?" Bunchie said. "But really, since I was a little kid, I always wanted to play football, go to the NFL, but who knows?"

Bunchie's schedule is only getting busier these days. He's working on his own reality show, and later this week, he's headed to New York City for an appearance on a morning talk show.