Measles outbreak in Southern California: Everything you need to know 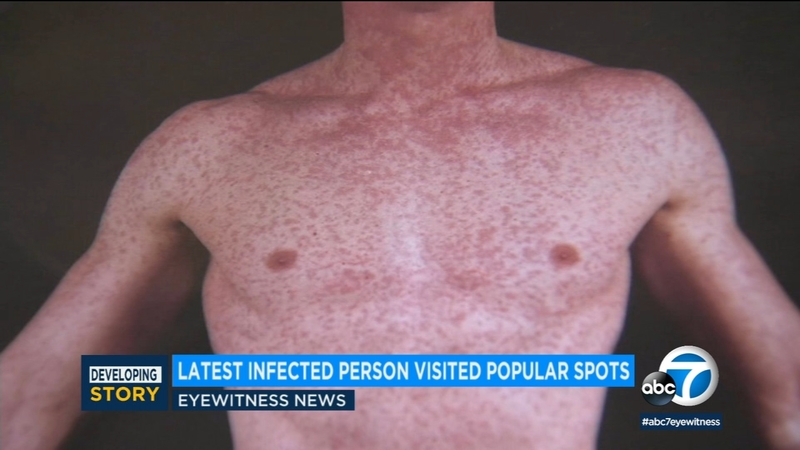 LOS ANGELES (KABC) -- Reported measles cases at locations across the Los Angeles area have residents on high alert, with an infected person visiting popular spots, including the Grove.

The Centers for Disease Control and Prevention says the United States now has the highest number of measles cases in a year since measles were eliminated in 2000, with more than 700 measles cases reported in 22 states this year. Of those, the CDC says more than 70% were unvaccinated.

Find information on everything from where the cases have been reported to vaccination locations below.

A person associated with the latest case visited popular tourist spots, including the Grove, the Los Angeles Farmer's Market, nearby shops and stores and the Los Angeles International Airport. People who traveled through those areas on April 27 are at risk for the next 21 days of developing measles.

An LAX traveler marked the sixth confirmed measles case in L.A. County this year. The patient traveled abroad through Tom Bradley International Terminal at LAX on April 23 between 4 p.m. and 7:30 p.m., rode on a Fox Auto Parks shuttle on that day, and visited the Home Depot on 20th Street in Lancaster three days later, between 8 a.m. and 11 a.m. The patient got measles after traveling internationally, and the case is unrelated to any of the other cases announced this year.

County health officials warned of three possible measles exposures in the past two months. A passenger with the illness passed through Terminal 7 on April 3. That person arrived in the late morning and left that night through Terminal 8. Another traveler with the viral infection passed through the airport in Terminal 7 on March 5. Another person with measles arrived at the airport on Feb. 21, traveling from Terminal B to Delta Terminal 3.

Health officials do not believe LAX is under threat of a measles outbreak.

Long Beach officials said a person infected with measles went through the Long Beach Airport the morning of March 30 and April 7.

Health officials said anyone in the airport at the time could have been exposed, but there was no continuing risk of exposure.

The Long Beach Department of Health and Human Services confirmed a case of measles in a resident of that city. That patient was described as a vaccinated graduate student at UC Irvine who has not traveled internationally. The Orange County Health Care Agency released a list of locations where people may have been exposed to the viral disease.

Los Angeles County health officials said 28 UCLA students are quarantined on campus or self-isolating off campus as of Sunday. That number is significantly lower than when the quarantine peaked at 129 last week. The student with measles attended classes at Franz Hall and Boelter Hall on April 2, 4 and 9 while contagious, according to UCLA.

"We expect that those notified will be quarantined for approximately 24-48 hours until their proof of immunity is established. A few may need to remain in quarantine for up to seven days. We have arranged for those who live on campus to be cared for at UCLA while they are quarantined," UCLA said in a statement.

MORE: Measles outbreak - many of those susceptible to infection are college age

The university did not give a definitive number but said the library staff, faculty employees and student assistants were cleared to return to work over the weekend. The library was open and operating on expanded hours.

A person with measles visited CSU Los Angeles' Library North on April 11 from 11 a.m. to 3 p.m. As a result, university officials said 127 staff employees and 71 student employees were sent home under quarantine orders and told to stay home to avoid contact with others as much as possible.

"The Department of Public Health has determined that there is no known current risk related to measles at the library at this time," CSU Los Angeles said in a statement.

The Department of Public Health has concluded that there is currently no known risk related to measles at the Library North at this time.

A person with measles visited El Pollo Loco Restaurant on Verdugo Boulevard in La Cañada Flintridge on April 11, while another individual went to El Sauz Tacos on San Fernando Road in Glendale on April 13.

Where to get vaccinated

Students at UCLA who are unsure if they received the standard two-vaccine series are urged by the university to visit the Ashe Student Health & Wellness Center. Faculty and staff are asked to contact their medical provider.

Doctors say measles can wreak havoc in some people, with symptoms including a runny nose, red eyes, fever and a rash. That's why experts say it's so important to arm yourself with the right information.

Measles is highly contagious and can stay in the air for up to two hours after an ill person coughs or sneezes, and can stay on surfaces for several hours, health officials say. About 90 percent of people who are exposed and not immune to the illness become sick 7 to 21 days after exposure.

Measles symptoms include fever, dry cough, runny nose, sore throat and red, watery eyes. Three to five days after symptoms begin, the CDC says a rash breaks out which appears as flat red spots on the face at the hairline and spread downward to the neck, trunk, arms, legs and feet. Small raised bumps may also appear on top of the flat red spots.

The Los Angeles County Department of Public Health says schools are "high-risk setting for exposure due to potentially frequent and prolonged contact."