Meet the Colorado man playing taps for America's fallen heroes: 'I will always honor them'

For seven years, Mark Stallins has been playing taps at cemeteries all across the country.
KABC
By David Ono 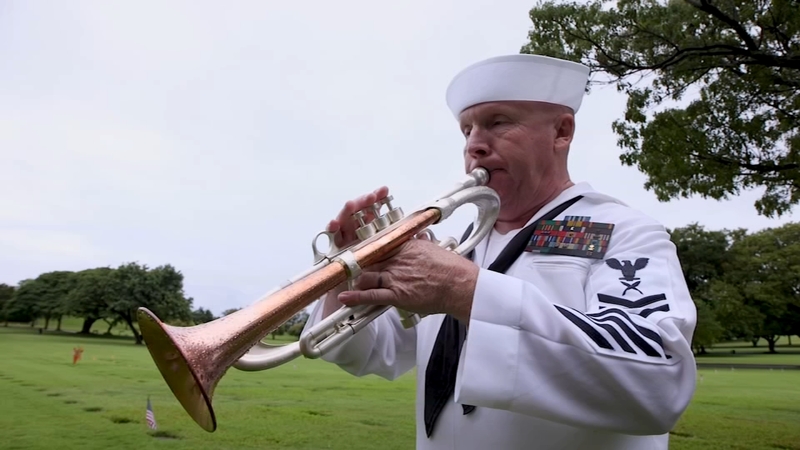 HONOLULU (KABC) -- Memorial Day's purpose is one of remembrance for the country's fallen soldiers, and there's one man who strives to make every day that special.

Mark Stallins of Colorado travels all over the country and plays taps at the graves of America's fallen heroes.

"Buglers have a saying for those 24 notes: the bugler is the most important man in the United States military, more important than any general, any admiral, any president," said Stallins on a rainy day in Honolulu, Hawaii, as he visited the National Memorial Cemetery of the Pacific. "For those 24 notes, a family will never forget, they'll forget everything else about a funeral service, but they will never forget those notes."

Stallins, a retired U.S. Navy Yeoman, knows that each grave has a story. Dressed in his crisp, white uniform, he hovered over one grave in particular that painted a tragedy from 80 years ago, when the Arizona took a direct hit at Pearl Harbor.

"The explosion actually ran below decks and literally, within a second, they lost 1,100 men," he said. "I mean, just like that. Gone. This is 25 of the men that they lost that day."

For seven years, Stallins has been playing taps at cemeteries across the country.

The very first grave was his father's.

"In 2015, I went to play for my dad at Fort Logan after I retired from the Navy, and he's in Englewood, Colorado," he said.

Ever since, he hasn't stopped, and on Memorial Day alone, he will play hundreds of times.

"Memorial Day to me is the willingness of one person to sacrifice everything of their being so that other people could live free and live the lives of their dreams," said Stallins. "Whether it's my dad, or whether it's any one of these people here, I really want to at least them to know that they're never going to be forgotten. I will always honor them. I will always respect them, and I love every single person that I play for."

It's what drives him to perform a song that has been around since the Civil War.

It may be simple, but what it stirs inside of us is not.

Comfort, pain, glory and tragedy. It's fleeting, yet eternal.

All in 24 notes as many remember the fallen heroes on this Memorial Day.