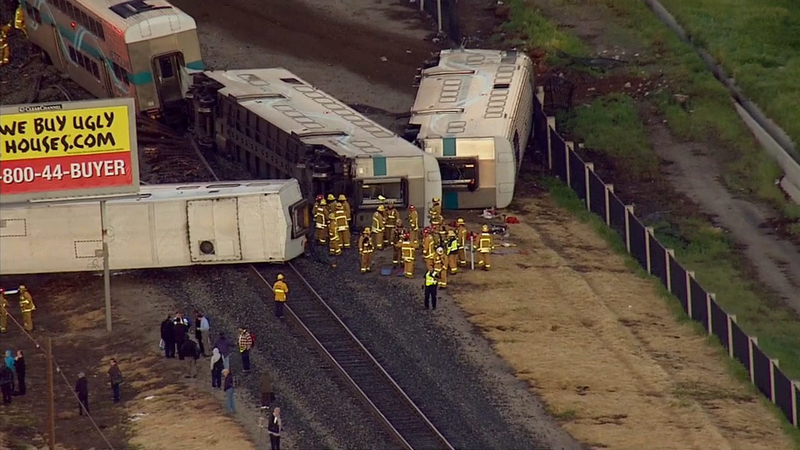 OXNARD, Calif. (KABC) -- A 54-year-old truck driver from Yuma, Arizona was arrested on suspicion of felony hit-and-run after a Metrolink train headed toward Los Angeles struck his large pickup truck, which was hauling a trailer, on the tracks in Oxnard Tuesday. No fatalities were reported, Oxnard police said.

Ventura County Line Train 102 crashed at about 5:40 a.m. near 5th Street and Rice Avenue. The vehicle caught fire after the crash.

Jose Alejandro Sanchez Ramirez managed to flee the scene, Oxnard fire officials said. An officer spotted Ramirez walking on Rice Avenue about 1.62 miles south of the accident and determined that he was the driver.

Ramirez was not injured, but was taken to Ventura County Medical Center for observation. He was arrested following his release from the hospital. He has a valid driver's license, police said.

Benites said the 2005 Ford-450 pickup truck appeared to be traveling southbound on 5th Street, and in attempting to make a right turn onto a street, instead turned onto railroad tracks and got stuck. It was unclear if the area was part of his regular route.

PHOTOS: Metrolink commuter train derails in Oxnard
A Metrolink commuter train derailed in Oxnard on Tuesday, Feb. 24, 2015. See photos from the scene.
Before the crash, the train was leaving from the Oxnard station. With two miles of straight tracks, the driver of the train was able to spot the vehicle on the tracks early and pulled the brakes and provided warning signals. Authorities said the train had been going eastbound slower than 79 mph cruising speed.

Upon impact, five cars derailed, including three seen on their side and two upright, fire officials said.

"The whole truck was just up in flames, or car, I didn't know what it was. It was a fireball," Ted Maloney said. He immediately went inside the train car to help passengers. Maloney found a sweater and wrapped it around the neck of a female victim, who was bleeding.

"I just held her hand and comforted her and told her help was on the way," Maloney said. 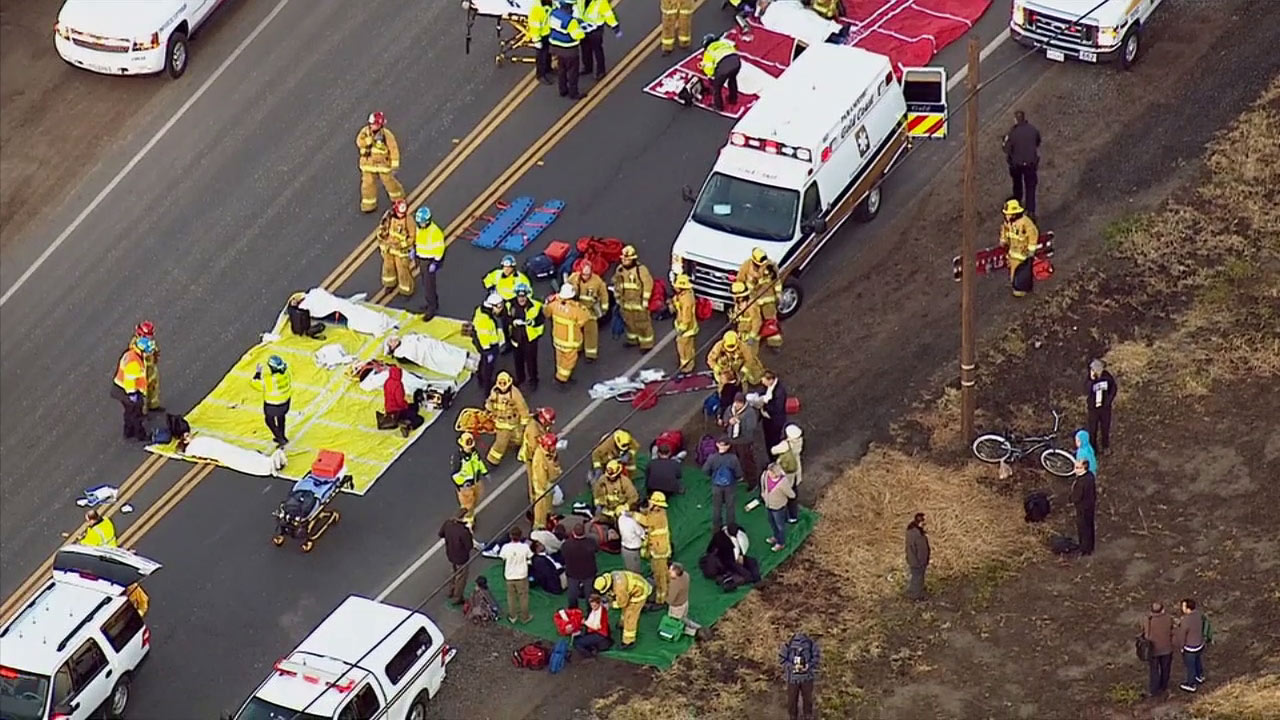 Dozens injured in Metrolink train collision transported to area hospitals
At least 28 people were injured Tuesday when a Metrolink commuter train struck a large pickup truck, which was hauling a trailer, on the tracks in Oxnard. Four victims were listed in critical condition.

"Patients have complained of dizziness, of headaches, of lower back pain, of pains related to being bumped, thrown, hit and so forth," said Dr. Bryan Wong, chief medical officer at Ventura County Medical Center.

Metrolink spokesman Jeff Lustgarten credited crash safety technology to softening the blow of the collision. About two-thirds of the Metrolink fleet is 5 years old or less and is equipped with the technology.

"The front end of the cab car is designed to crumple by nature to help absorb the energy of that collision," Lustgarten said.

The National Transportation Safety Board has sent a team to investigate the crash.

"[Federal Railroad Administration investigators] will conduct a thorough investigation to determine the factors that contributed to this accident. Safety must be every railroad's absolute top priority and we will establish what lapses, if any, occurred and order any necessary corrective actions," a spokesman for the Federal Railroad Administration said.

Experts will investigate if the crossing arms were working properly. They will also check the train's recorders. Authorities are optimistic the train had inward and outward facing cameras.

Approximately 24 freight trains and four passenger trains pass through the track near 5th Street and Rice Avenue per day, said Constance Gordon, a spokeswoman for the California Public Utilities Commission.

There have been 11 incidents on this specific crossing in the last 10 years, not including the incident which occurred Tuesday. The last incident occurred on June 3, 2014. Gordon said two people were killed.

The train tracks appeared to be heavily damaged following the crash Tuesday, which caused delays and cancellations for Metrolink and Amtrak trains. Amtrak train service between Los Angeles and Goleta was suspended for Tuesday.

Regularly scheduled Metrolink service continued between Union Station in Los Angeles and Moorpark. Buses were provided for passengers traveling beyond Moorpark, with stops at Camarillo, Oxnard and east Ventura.

Drivers were asked to avoid the area. Rice Avenue was closed between Sturgis and Wooley roads. Fifth Street was shut down between Rose Avenue and Del Norte Boulevard. Eastman and Rice avenues were also blocked.