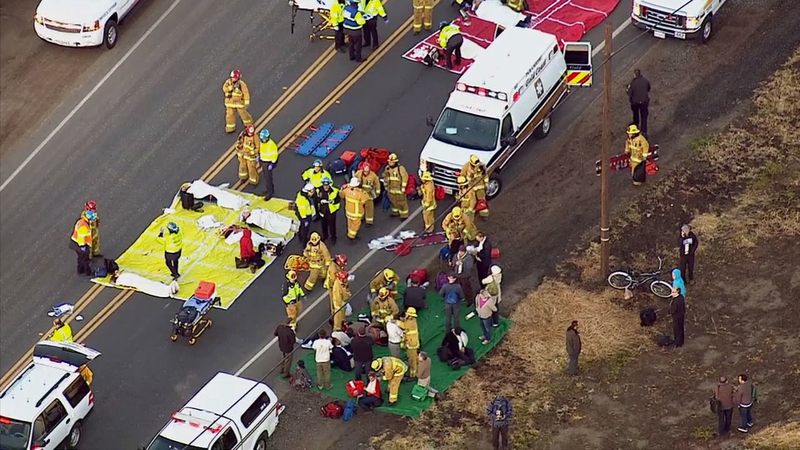 VENTURA, Calif. (KABC) -- At least 28 people were transported to local area hospitals Tuesday after a Metrolink commuter train struck a large pickup truck, which was hauling a trailer, on the tracks in Oxnard. Four victims were listed in critical condition.

A total of 49 people were on the train, including 46 passengers and three crew members.


Eight of the 28 people transported to local area hospitals were admitted. Four of them remain in critical condition in an intensive care unit. Twenty patients were treated at the emergency rooms and released.

"Two of those patients have since showed up at a local hospital complaining of unknown injuries at this point," Caroll said, bringing the total of injured patients up to 30.

The Metrolink train engineer was the most critically injured of the nine patients at the hospital. He suffered severe injuries to his chest and heart, said Dr. Bryan Wong, chief medical officer at Ventura County Medical Center.

"There was a need at one point to calm him and sedate him," he said.

"He certainly recognized his son, who was at the bedside. He was very encouraged. He was squeezing his hand," Wong said. "He was, you know, able to answer some very deeper questions about things about his medications, about things in his past, and so certainly he was there mentally which was really encouraging to us as staff."

A veteran of the train system tells Eyewitness News the control cab is like a tin can. There is little to protect the engineer.

The driver of the vehicle involved in the collision, Jose Alejandro Sanchez Ramirez, 54, of Yuma, Arizona was taken to the Ventura County Medical Center for observation. He underwent several tests that doctors would not disclose and was arrested on suspicion of felony hit-and-run following his release from the hospital.

Wong said the victims suffered injuries typical of high-speed accidents, including head trauma, back injuries and broken bones, but nothing life-threatening.

"There was a particular passenger that had a chance to speak to me about his injuries," Wong said. "He was working on his laptop when suddenly he felt a very violent jerking motion, so quick that he wasn't able to even grab onto the seat or anything around him, but he was thrown against the side of the train at that point."