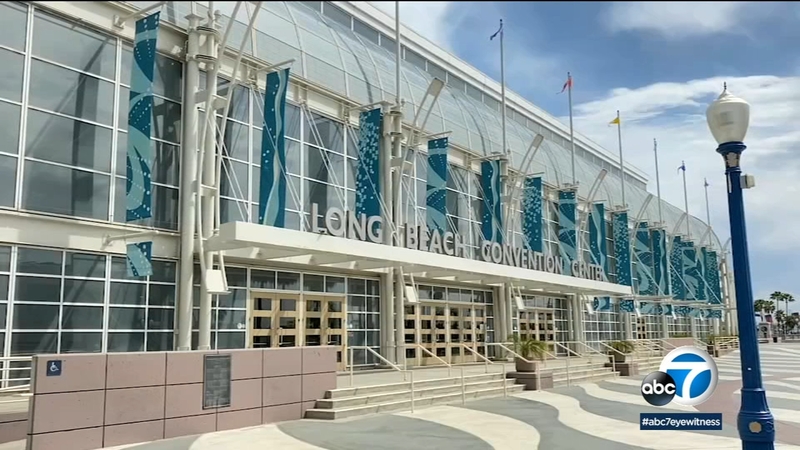 LONG BEACH, Calif. (KABC) -- Elected officials toured the Long Beach Convention Center on the day after it was reported that dozens of migrant children who are temporarily housed at the facility were diagnosed with COVID-19.

As of Thursday, 729 children who recently crossed the U.S.-Mexico border unaccompanied were living at the Convention Center, each one awaiting to be released to family members.

"They've been through a lot," Rep. Nanette Barragan, chairwoman of the the House's Border Security, Facilitation and Operations Subcommittee, told reporters after the tour. "Some of the children did mention that it was very tough for them to get here. But now they're happy they're here and they just want to be with family.

With so many unaccompanied minors showing up at the border, U.S. Customs and Border Protection facilities have been overwhelmed, providing inadequate services with children living in cages.

The facility at the Long Beach Convention Center set up by President Joe Biden's administration with the intention of alleviating those problems.

Sandra Ortiz saw her son, Bryan, for the first time in more than three years after the pair were forcibly separated under the Trump administration's policy aimed at deterring illegal immigration.

"Border Patrol is a law-enforcement agency," Barragan said. "They are not in the business of caring for children."

Los Angeles County Supervisor Holly Mitchell said she "intuitively" has "a concern when I think about kids in congregate settings. Right? That's not where kids should be -- at a convention center.

"What we saw here today relieved all of that concern and apprehension," Mitchell said.

The temporary housing quarters at the Convention Center have been open for two weeks, and are scheduled to close in August.

Twenty children have been released to family members throughout the U.S. after staying at the facility, officials said. That number is expected to double by the end of this week.

Fifty-five children at the Convention Center have tested positive for COVID-19.

Fifty-four of those children "do not have symptoms," Long Beach Mayor Robert Garcia said. "So only one child of the 55 has actually had any COVID-19 symptoms."