Fishermen rescue 2 teen girls who were swept out to sea in Monterey Bay: 'Thank God we were there'

Lifeguards said the girls were in the water for nearly 30 minutes, and the water temperature was reportedly 53 degrees.
KABC 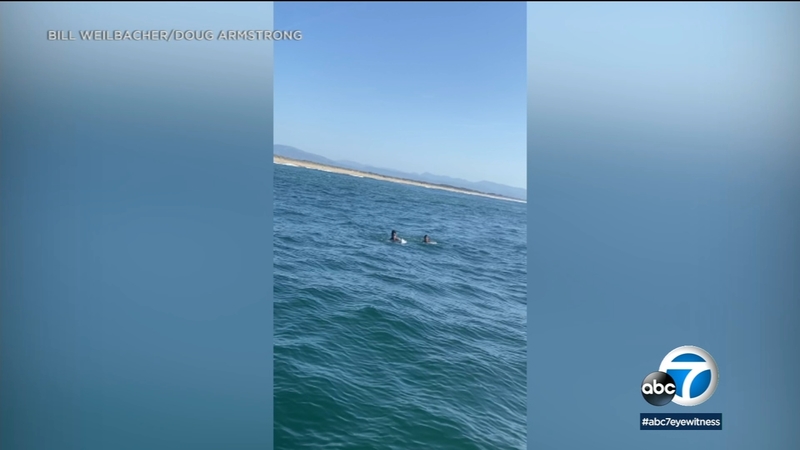 MONTEREY BAY (KABC) -- A group of fishermen who were in Monterey Bay last week jumped into action when two teenagers suddenly got swept out to sea.

According to one of the fishermen, the group was salmon fishing when they spotted the teen girls in the water.

The 16-year-olds went under at Salinas River State Beach, according to authorities.

Lifeguards said they were in the water for nearly 30 minutes. The water temperature was reportedly 53 degrees.

"Thank God we were there because there was nobody behind us, and there was no boats coming out," said boat captain Michael Arujo. "It would have took about at least half an hour to get there, and in that water, you can't last 10 minutes."

The fishermen said they may have never come across the girls had they not decided to stay in the water for a bit longer.

"Oh my God, the poor little girls. So cold," said Arujo. "I grabbed the first girl and helped her up, she was so cold, and she collapsed on the deck."

The fishermen believe they were simply in the right place at the right time.

"I mean, neither one of them could stand up when they got on the boat, and you know, the one young lady said she couldn't feel her legs," said fisherman Bill Weilbacher. "So, everything worked out as well as it possibly could have, and the stars really aligned for them, and for us, quite honestly. It was just a wonderful experience."

Lifeguards said the girls did not seek any medical care.