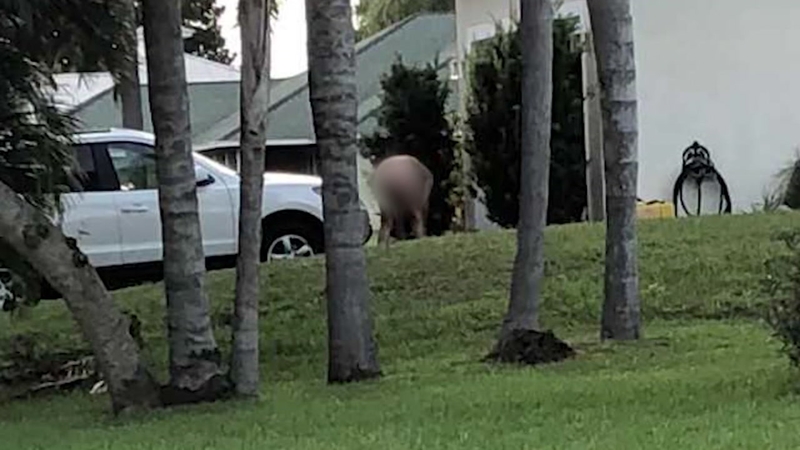 Residents upset over neighbor who does yard work naked

STUART, Fla. -- A man in south Florida who prefers to do his lawn work in the nude has his neighbors up in arms.

People who live in the neighborhood say their neighbor does yard work and walks around his property naked. They say they have called the sheriff's office, but deputies say there is nothing they can do.

"I came out Sunday night to put the trash out, and I look over and he is bent over, winding up his hose, and I'm like that is my view of the neighborhood," said neighbor Melissa Ny. "He works on his car, and he does it naked. Everyone has called the police. He is just out there doing his yard work, whatever he needs to do outside, naked."

"Have some respect for the neighborhood kids," said neighbor Charlie Estes. "Kids catch the bus here. It's wrong."

Several people have called the Martin County Sheriff's Office, but say deputies tell them as long as he isn't touching himself inappropriately, there is nothing they can do since he is on his own property.

"I have seen these people actually stand on their front step, buck naked, both of them, and talk to a police officer," Estes recalled. "The sheriff's department told me to turn my head."

At least one neighbor didn't have an issue with a man stripped down to his birthday suit.

"I am not one of those people that have concerns just because it is their way of life," said neighbor Molly Merritt. "It is on their property and I know it is legal."

The man in question was not interested in doing an interview, saying he and his family are private people.

"If they are private, why are your privates on display?" asked Ny. "That is not private at all. That is very public."

Some neighbors say they plan to approach the man and see if they can work out a compromise.
Report a correction or typo
Related topics:
societyfloridanaked in publicnaked manu.s. & world
Copyright © 2022 KTRK-TV. All Rights Reserved.
TOP STORIES
LA County could hit 'high' COVID level in July, prompt return of masks
Here's what to know about the end of CA's eviction moratorium
California late start law aims to make school less of a yawn
LAX expected to be second busiest US airport over July 4th weekend
Woman searching for brother reported missing in Redondo Beach
Lawyer: Nipsey Hussle lifted up neighborhood he was gunned down in
Apple's newest CarPlay feature will make buying gas easier
Show More
How to save money when buying a new car in an inflated market
Orange County confirms 1st presumptive case of monkeypox
OC woman attacked and sexually battered inside Irvine storage facility
Silver Lake restaurant offers free food in exchange for Sriracha
USC, UCLA moving from Pac-12 to Big Ten in 2024
More TOP STORIES News