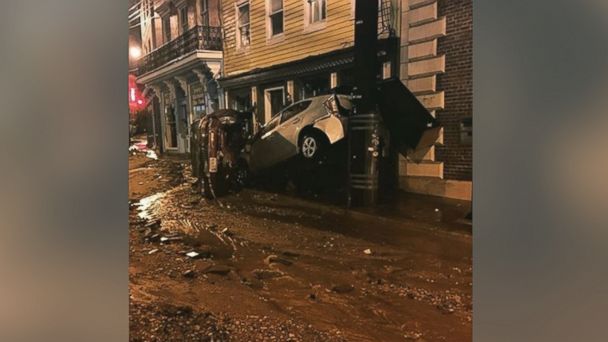 Heavy rains pummeled the mid-Atlantic region this weekend, causing flash floods that in one Maryland city sent cars shooting across roads in a river-like flow.

Maryland and New Jersey were among the states hardest-hit flooding, but Pennsylvania, Delaware, and Virginia were also affected by heavy storms. At least one woman was confirmed dead in Howard County, Maryland, according to officials.

Allan Kittleman, the chief county executive for Howard County, Maryland, tweeted a short video of what looked like waves rippling in the middle of a street in Ellicott City, Maryland.

Video captured on Instagram showed cars on at least one street in Ellicott City being carried away in what looked like a tide. A state of emergency was declared for Howard County, and local ABC affiliate WJLA-TV reported "10 to 12 inches of flowing water" along with damages that would take "days to weeks of clean up."

In Princeton, New Jersey, water reached waist-deep levels, and in Plainsboro, New Jersey, WABC-TV, an ABC station in New York, reported that cars were rendered immobile by floods, and that there were power outages around that region. Six inches of rain hit parts of the state.