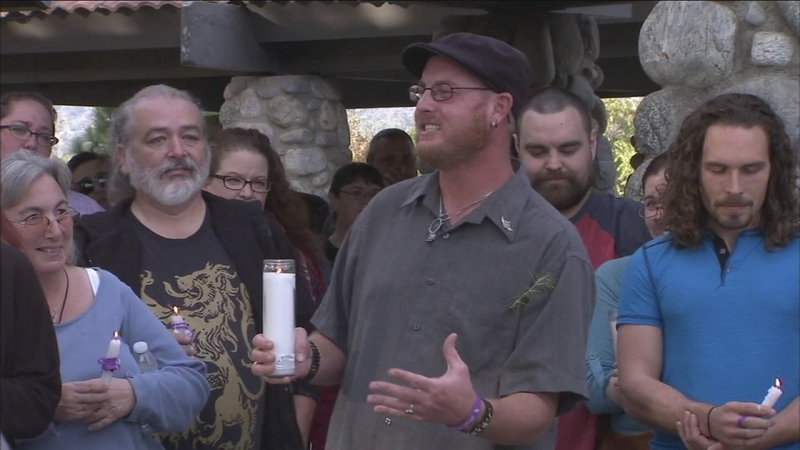 Kaufman, 42, ran an independently owned coffee shop inside the Inland Regional Center where the attack took place during a holiday banquet. Many of the customers and people Kaufman worked with had development disabilities such as epilepsy and autism.

Loved ones payed tribute to him at the Santa Fe Recreational area in Irwindale, where for the last 16 years, Kaufman was involved in the Renaissance Pleasure Faire.

The emotional celebration was filled with tears, hugs and bursts of laughter as positive, funny stories were told to remember his life.

Kaufman was described by many as a bright light who lit everyone around him with smiles. Kobe Lee Reeder, a friend of Kaufman said joy and laughter from his loved ones is what he would have wanted.

"Daniel wouldn't want us to be overcome with sadness and try and search for why this happened and who to blame, he would want us to go on with the show, make everyone laugh... so we're telling stories about how he changes our lives for the better," she said.

It wasn't just friends who showed up, Gasser Shehata had never met Kaufman, but he did know Kaufman's killer - Sayed Farook.

"Not closely, but he came to our mosque a couple of times a week and he prayed with us. So when this happened, we were in shock. We couldn't believe that this happened," Shehata said.

He and and others from his San Bernardino mosque wanted to support Kaufman's friends and family and speak about their faith.

"We wanted to show that, actually, Muslim are not terrorists. We are heartbroken. We actually haven't been sleeping for the last three days," Shehata added.

Ryan Reyes, Kaufman's boyfriend of three years, said his partner would have approved of his celebration of life.

"It was exactly what he would have wanted it to be - us sharing stories, laughing, enjoying life and enjoying out time together because we are such a big, huge family," he said.