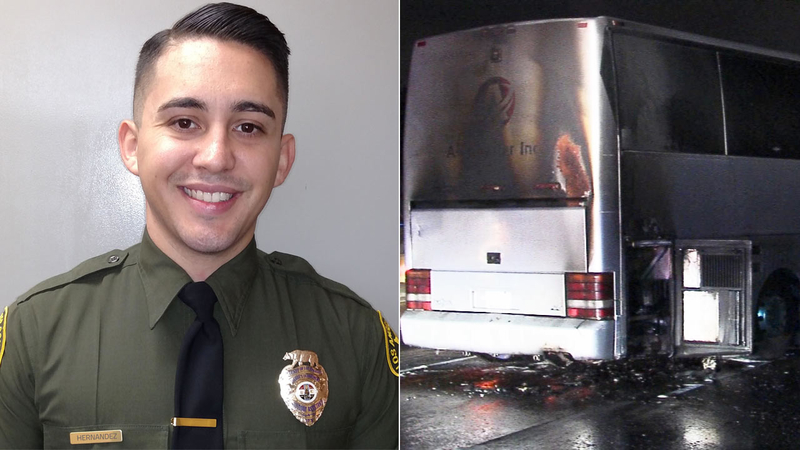 HACIENDA HEIGHTS, Calif. (KABC) -- A Los Angeles County Sheriff's Department custody assistant is being credited for saving 42 people who were stuck in a burning bus in Hacienda Heights.

Jesse Hernandez, who is assigned to the North County Correctional Facility, was driving along the westbound 60 Freeway on his way to work Sunday night when he noticed a charter bus stopped at an angle blocking two lanes near the Hacienda Boulevard off-ramp.

When he saw flames shooting from the rear engine compartment of the bus, Hernandez immediately pulled over to help, according to a statement from the sheriff's department.

Running toward the bus, Hernandez saw several passengers frantically hitting and kicking at the exit door, which appeared to be stuck.

Hernandez was able to force the door open, allowing the 42 adults on board, including the bus driver, to get out without getting hurt.

Hernandez then went inside the smoke-filled bus to make sure no one else was left behind.

"I didn't want to go later on and finding somebody was actually in the bus, so I ran really fast, did a quick check of the whole bus from the front to the back," said Hernandez.

Sheriff of Los Angeles County Jim McDonnell was grateful a hero of the department was at the right place, at the right time.

"No doubt in my mind had he not done what he did, we would have had a real tragedy here," McDonnell said. "So we're very proud of Jesse."