KABC
By Marc Cota-Robles
MALIBU, Calif. (KABC) -- Malibu property owners were fined nearly $4.2 million by the California Coastal Commission for blocking access to a 3-mile stretch of beach for more than 10 years.

The property owners, Warren and Henny Lent, rented out their beach-front house for about $1,000 a night. They purchased the residence in 2002. Renters posted online reviews praising the exclusivity of the house, which had a locked gate and private staircase leading to Las Flores Beach.

Since 2007, the commission said it has been notifying the owners about the property violations. According to the commission, staff sent 30 letters, conducted site visits and phone conferences, as well as other attempts to reach a solution to no avail.

One neighbor said the fine against the owners should have been higher.

"They deprived the public of that access way since they owned the property. That's 15 years. They should charge them $1 million a year maybe," David Youmans said.

The commission reached a unanimous decision to fine and order the property owners in the 20800 block of Pacific Coast Highway to open a pathway in order for the public to have access. 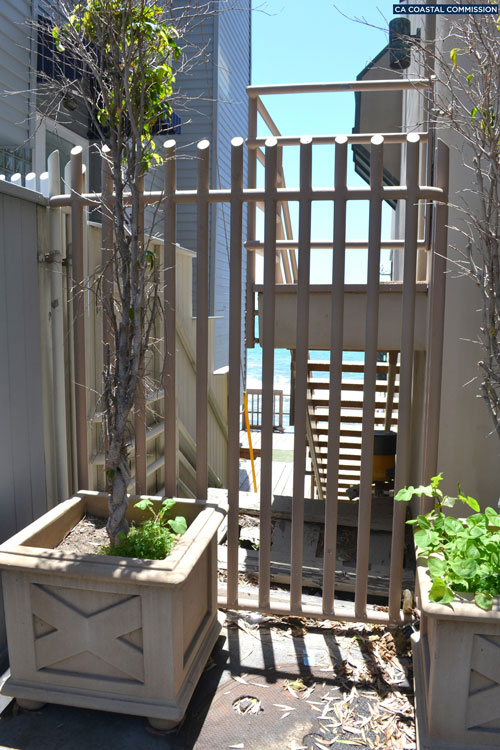 Attorney Alan Block, who represents the property owners, said his clients did not construct the private staircase and removing it would violate property rights. He added improvements to the easement would need to happen first.

"If that gate was removed, you still can't get down to the landing over the storm drain - it's a 6-foot jump," he said. "This, without a doubt, will substantially, adversely affect their life."

The fine is the first the Coastal Commission has levied for access violations. The property owners have 60 days to submit a plan to pay the penalties within a year.

In addition to the Lent property, the commission reached a settlement with the Malibu Beach Inn owners to create two stairways to Corbon Beach. The owners were fined only $925,000, which is a significant difference from the millions the Lent family faces.

The commission said the lowered fine is because the Mani Brothers Real Estate Group, which owns the inn, worked cooperatively to correct any access violations.

The commission said some residents who blocked access to beaches used fake parking signs, painted their curbs red and paid security guards to patrol the coast in front of their homes, among other things.

In 2014, the state Legislature amended the Coastal Act to allow the commission to increase fines to nearly $11,250 per day for access violations. Since then, the staff have found solutions with owners for about 50 separate access violations.

"Malibu has some of the most beautiful stretches of the California coast and for the public to be robbed of any part of their beach is a serious violation of the Coastal Act," said Acting Executive Director John Ainsworth. "I hope this sends a message to other property owners thinking of blocking access that our commission takes this very seriously."