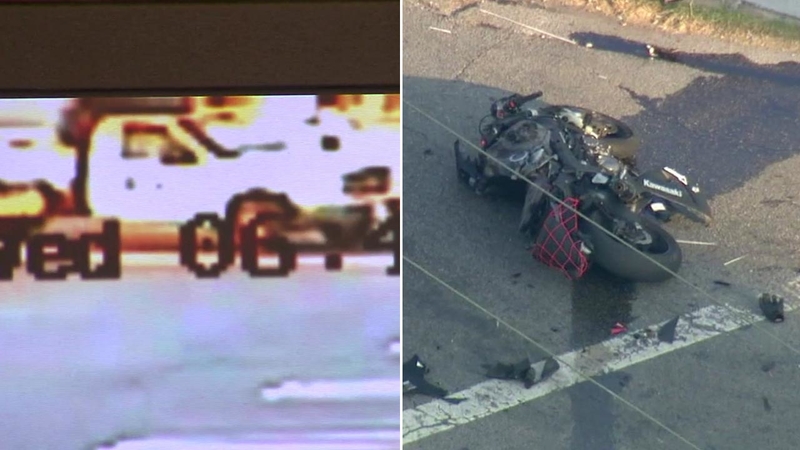 RESEDA, LOS ANGELES (KABC) -- The search is on for the driver who struck and killed a motorcyclist in Reseda and fled the scene Wednesday morning.

The incident occurred in the intersection of Vanowen Street and Tampa Avenue shortly before 7 a.m. Investigators said a motorcyclist slammed into the side of a truck as the driver made a turn at the intersection.

Authorities said the driver then sped off, leaving the motorcyclist to die in the street.

"At this moment the motorcyclist lost his life here at the scene. The responsibility of the driver of that truck was to remain at the scene. He chose not to," said Bill Bustos with Los Angeles police. "He was in the best position to call 911, to call paramedics, and that did not occur. He decided to ride his truck westbound while failing to render aid, becoming a felony hit-and-run crime."

Investigators released surveillance video captured by a nearby business that shows the hit-and-run vehicle taking off after the tragic collision.

"We are sharing that video with Channel 7 and all the media in hopes that somebody in the community will recognize that truck and will recognize what happened at 6:45 this morning and will contact Los Angeles Police Department," Bustos said.

Travis Jackson, who heard the collision, says he was horrified by the tragic crash and could not believe the driver of the truck didn't stop.

"Well that's totally wrong for you just to hit-and-run on anyone, you know, it's people out here trying to travel, to get places safely, go to work safely, and for you to hit-and-run, that's someone's family member, and their family is worrying about them," Jackson said.

Detectives say there has been a recent spike in collisions between drivers and motorcyclists, and many of them have been fatal accidents.

"We believe because of the weather, there are more motorcyclist on the road," Bustos said.