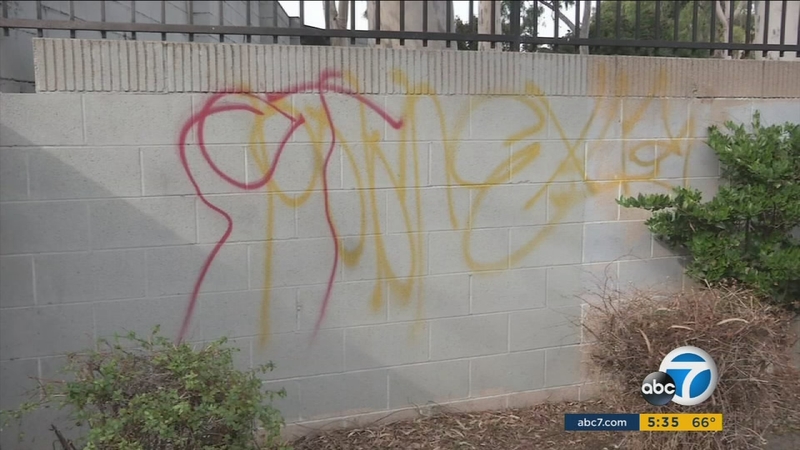 BUENA PARK, Calif. (KABC) -- A Sikh temple in Buena Park was targeted earlier this week by vandals who apparently thought it was a Muslim place of worship, and now authorities are investigating the vandalism as a possible hate crime.

Community members found graffiti on the exterior of the Gurdwara Singh Sabha in the 7100 block of Orangethorpe Avenue on Sunday morning.

An anti-ISIS expletive was also spray-painted on a truck in the parking lot, officials said. That's what bothers community members the most.

"People always think that the person who wear a turban is somehow related to a terrorist group or ISIS but they're not," Inderjot Singh said.

In the wake of the San Bernardino terror attack, the Sikh community is fearful they're being mistaken for radicals. The peaceful Sikh faith is not related to Islam.

While Sikh leaders are calling this a case of mistaken identity, this is the first act of vandalism against Gurdwara Singh Sabha in 32 years.

Buena Park police are now investigating whether the incident is gang related and possibly a hate crime.

"In a situation like this and the times that we live in, with the recent events, it's always prudent for us to look at all angles, so of course we'll take this seriously," Buena Park police Cpl. Bret Carter said.

Vandals also trashed basketball hoops which were meant to be used by everyone in the community.

A major tenet of the Sikh religion is to help anyone in need and to open their doors 24/7.

Community members say they plan to continue to do that cautiously with beefed up security.

"We have enhanced our camera systems, so the entire building, outside, parking lot, everything is being watched," Jaspreet Singh said.

The congregation said they're not scared but concerned about the motives of those responsible.

Gurdwara Singh Sabha members had the following message for the community: "We want all Americans to come together and protect each other rather than splitting ourselves based on communities and hating each other."