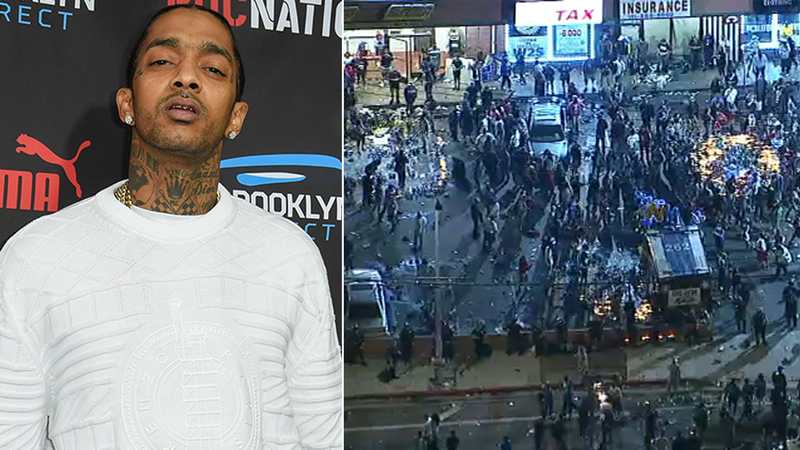 HYDE PARK, LOS ANGELES (KABC) -- A chaotic scene broke out and 19 people were hospitalized Monday night after a large crowd gathered and then stampeded at the Hyde Park store where rapper Nipsey Hussle was killed.

The Los Angeles Fire Department transported two critical patients, one who was hit by a vehicle and another with a traumatic penetrating injury due to an unknown cause. Two others were seriously hurt and 15 were transported with non-life-threatening injuries. A number of people also walked into emergency rooms on their own to get checked out.

Fire officials said the exact cause of the disturbance was unclear. Most of the injuries may have occurred as the crowd fled in panic, officials said.

An LAFD spokesperson said that there may have been one gunshot victim. Authorities initially reported there was no evidence of that but fire officials later said they are still trying to sort that out.

The LAPD had earlier tweeted that there was not a shooting at the site: "Our men and women are on scene and making every effort to protect everyone in attendance at the Nipsey Hussle vigil. Reports of shots fired at the vigil do not appear to be accurate. We do have injured in the chaos and are attempting to restore order."

A HUGE stampede of people rushed out of the @NipseyHussle memorial area. People thought they heard something break or a loud noise and started running. @ABC7 pic.twitter.com/rVp84eNCYi

"We understand the community is mourning and we feel your loss. We are asking for everyone to follow the officers directions and disperse from the immediate area."

During the day, hundreds of people had gathered peacefully at the store where the rapper had been slain Sunday afternoon. Fans were gathering to remember him.

Later in the evening, a disturbance suddenly broke out in the crowd and people began fleeing from the store.

A chaotic scene broke out and several people were injured after a large crowd gathered and then stampeded at the Hyde Park store where rapper Nipsey Hussle was killed.

LAPD officers began forming skirmish lines and keeping people away from the scene. Eyewitness News was there when people were running for their lives. Many even tried to shove themselves underneath the ABC7 news van for safety. Babies were heard crying and several shoes were left behind amid the chaos.

Fans of the slain rapper said Hussle would not have wanted more violence.

"I'm pretty sure he would be really upset. He never wanted this for this community. No violence," one fan said.

As the chaos lessened, the LAPD later released the name of the suspect wanted in Hussle's death. The suspect was identified as 29-year-old Eric Holder. He was last seen in a 2016 white four-door Chevy Cruze with the California license plate 7RJD742.
EMBED More News Videos

A suspect wanted in the shooting death of Nipsey Hussle was identified by police Monday night.

The scene of the stampede was eventually blocked off and off limits to the public. A crisis management team was working on moving all candles and flowers to one area, and at 5 a.m. Tuesday, a sanitation team will arrive to clean up the debris. The hope is people will be able to return to the scene to continue mourning the death of the rapper, but in a safe and secure manner.
Report a correction or typo
Related topics:
hyde parklos angelesriotrappercelebrity deathsvigilshootingmemorial
Copyright © 2022 KABC Television, LLC. All rights reserved.
TOP STORIES
California Governor Gavin Newsom tests positive for COVID-19
Texas gunman threatened rapes, shootings on Yubo app, users say
Police inaction moves to center of Uvalde shooting probe
Suspect shot, killed by Ontario police after chase ends in crash
27-year-old arrested for murder after man killed inside Downey home
Flight cancellations kick off Memorial Day weekend
Volunteers place flags during ceremony at Riverside National Cemetery
Show More
LA council takes steps to make all new buildings in city zero-carbon
$6.13 a gallon: Price of gas in LA County surges to record high
'Is it worth my kid?' Parents of TX school shooting victim speak out
OC high school student honored by The Angels to throw first pitch
Jury's duty in Depp-Heard trial doesn't track public debate
More TOP STORIES News