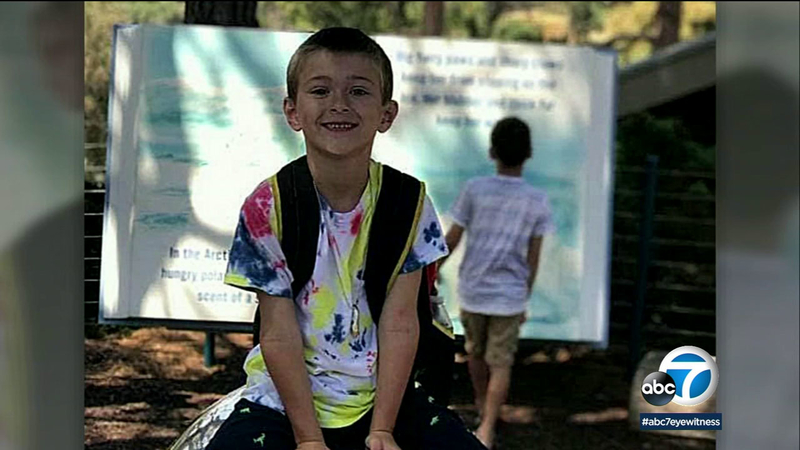 CORONA, Calif. (KABC) -- A court document has revealed disturbing details about the case of Noah McIntosh, a missing 8-year-old Corona boy whose father has been charged with murder.

Bryce McIntosh was charged on Thursday with his son's murder as the search continued for the boy's body.

According to a court document, investigators believe Bryce McIntosh purchased acid, bolt cutters, a 32-gallon trash can and other items before the boy went missing.

The father of Noah McIntosh, an 8-year-old Corona boy who has been missing for more than four weeks, has been charged with the child's murder.

The court document sheds light on some of that evidence, which includes data from McIntosh's cellphone, computers and other electronic devices and storage devices.

Cellphone data also showed locations where McIntosh's phone was at different times on March 4 and March 5.

On March 5, his cellular phone was in the area of Wilson Valley Road, north of Highway 371, in the unincorporated area of Aguanga, the document states. FBI agents and Corona police officers found a trash can, a paper with "Noah M" written on it, purple latex gloves, a plastic bag with residue consistent with blood, parts to a Ninja blender, empty bottles of drain cleaner, empty cans of oven cleaner, blankets, yellow towels and one blue long cuffed glove.

During a search of McIntosh's home, authorities found an owner's manual for a Ninja blender, but no Ninja blender was located inside the residence, the document stated.

According to the document, many of the items located matched items that were either located at McIntosh's residence, in his car, or that he was seen purchasing.

Also on March 4, McIntosh went to a Lowe's Home Improvement store in Corona and purchased a 32-gallon Brute trash can and a 32-ounce bottle of sulfuric acid drain opener, the document states, adding that McIntosh also went to a Target and bought two bottles of drain opener.

The trash can he purchased matched the one located by police on March 16 at a site off Wilson Valley Road, the document states.

On the evening of March 18, a investigators were seen taking a plumber into McIntosh's home. The court document explained police hired a plumbing company to assist them in conducting a search warrant at the residence. That plumber removed the P traps from the home's bath tubs, bathroom sinks and kitchen sink. The plumber told investigators that the P trap for the tubs appeared cleaner than a normal P trap considering the age of the building.

Investigators also said they interviewed McIntosh's young daughter, who described physical abuse to Noah "by her daddy." The abuse involved being in the bathtub, cold water and Noah being handcuffed, the document stated. She described helping her dad hold Noah's legs down in the water.

The investigation began March 12 when Godfrey called police and requested a welfare check of Noah at his father's home in 4600 block of Temescal Canyon Road. At the time, the mother said she had not been able to contact Noah for almost two weeks.