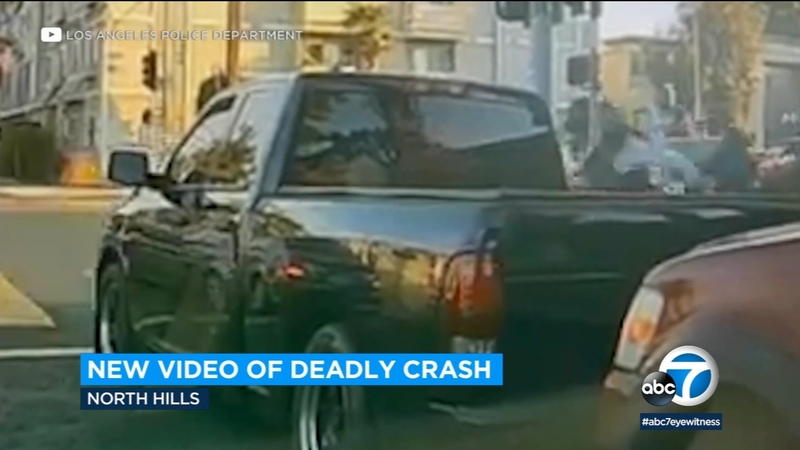 NORTH HILLS, LOS ANGELES (KABC) -- Police released video of a two-vehicle crash that killed an 18-month-old boy who was in a stroller on the sidewalk when the collision happened in North Hills Sunday.

Video shows the two vehicles colliding at an intersection and one of vehicles then jumps the curb and hits the child and a woman, who were at the corner of the sidewalk alongside several other pedestrians.

The boy, Sebastian Morales, died at the hospital.

The collision occurred about 7:30 a.m. near the intersection of Nordhoff Street and Langdon Avenue, according to the Los Angeles Police Department.

A 2016 Honda HRV heading west on Nordhoff was making a left turn when it collided with a gray Toyota Camry, LAPD said.

A family is in mourning after an 18-month-old boy was killed when two cars collided in North Hills early Sunday, sending one vehicle careening into the toddler's stroller on the sidewalk.

The impact sent the Honda over the curb at the southeast corner of the intersection, crashing into the boy in the stroller and an adult woman standing on the sidewalk near a food cart.

The female pedestrian, not related to the boy, was treated at a local hospital.