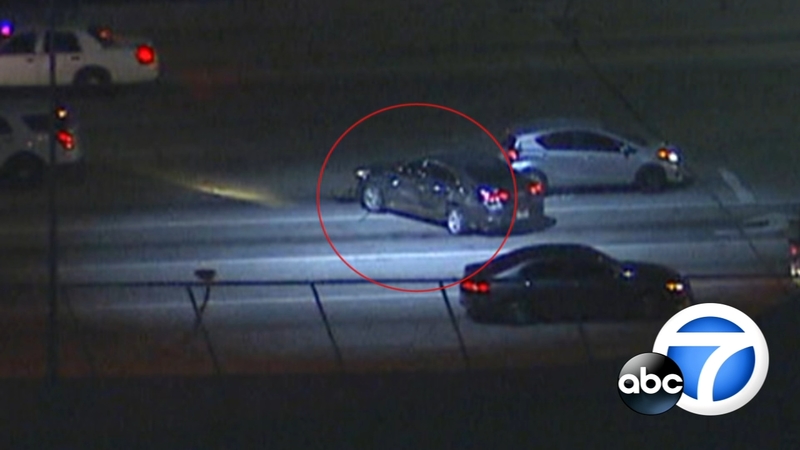 AIR7 HD video showed the suspect boxed in by officers on an overpass after a chase that began in Apple Valley. Sheriff's deputies said they were following up on investigation of a "known parolee" when they found the suspect in his vehicle and he fled from his home.

As officers approached the vehicle after boxing it in, a woman exited the vehicle and stumbled to safety. Then the suspect rapidly backed out, possibly in the direction of some officers, and continued trying to escape as officers opened fire multiple times at the vehicle.

A driver in another vehicle was nearly caught in the crossfire, but managed to escape his own vehicle and run off.
EMBED More News Videos

Footage from AIR7 HD shows the moments a chase suspect was shot by officers following a dramatic chase that ended in Fontana Wednesday night.

The pursuit began in the Barstow area and headed down the 15 Freeway through the Cajon Pass into Fontana, where the driver switched to the eastbound 10 Freeway. Eventually the vehicle exited and was pursued on surface streets until getting boxed in by police vehicles near Citrus and Valley.

After officers opened fire, the suspect appeared to be alive inside the vehicle. Nearby streets were blocked off as officers remained in a standoff with the suspect. The westbound 10 Freeway was also shut down during the standoff.

Multiple officers approached the vehicle behind a shield with weapons drawn and pulled the driver out from the front seat.

As officers examined the suspect and lifted his shirt, several wounds were visible on his torso.

His exact condition was unclear, but he was expected to survive. He appeared to be badly injured but moving as he was given medical attention, placed on a stretcher and loaded into an ambulance.