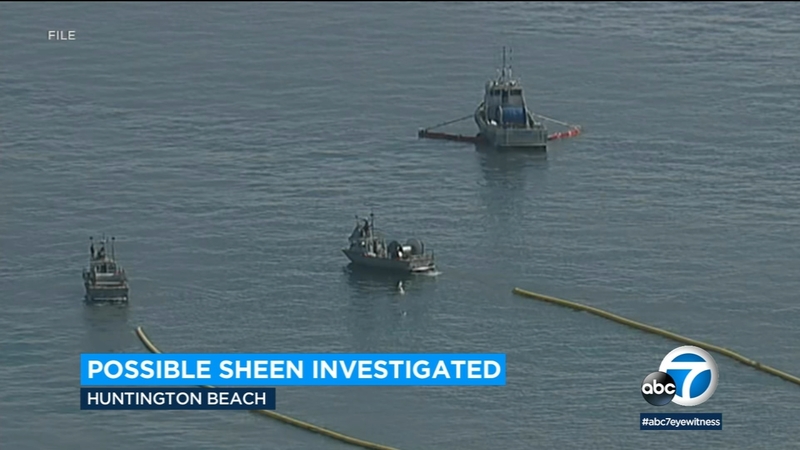 HUNTINGTON BEACH, Calif. (KABC) -- An oil sheen reported on the water off Orange County on Saturday near the location of an earlier spill was likely a result of repair work being done in the area and not a new spill - and was not visible later in the day, officials said.

The U.S. Coast Guard said by Saturday afternoon it did not observe the sheen that was reported earlier in the day, according to updates from local elected officials.

Earlier Saturday, authorities were investigating a report of an oil sheen measuring about 30 feet by 70 feet on the water in the area where crews continue to make repairs to a damaged pipeline that resulted in an oil leak of some 25,000 gallons in early October.

The observation sparked concerns about a new spill in the area.

By later in the afternoon, authorities said the sheen was likely related to the repair work and not an indication of a fresh leak.

"We are expecting another flash alert later this afternoon, but initial observations from @uscoastguard & @CaliforniaDFW are not seeing signs of an oil spill," state Sen. Dave Min tweeted. "Possible that the first sheen was related to remedial work being done on the damaged pipeline."

Divers then observed oil droplets on the syntho-glass wrap covering the damaged line, Foley said. They removed the old wrap and installed a new one. As of 2 p.m. no sheen has been observed in the area, she said.

The pipeline itself has remained shut down since the initial spill on Oct. 2.

Authorities are still investigating to see if the sheen is related to the droplets found on the wrap.

Early last month, a pipeline owned by Houston-based Amplify Energy leaked at least about 25,000 gallons of crude oil into the ocean off the coast of Orange County. Blobs of oil washed ashore, oiling birds and shuttering the famed shoreline of Huntington Beach for a week.

Environmentalists braced for the worst but the damage has been less than initially feared. Much of the oil broke up at sea and local officials put up booms to keep the crude out of sensitive wetlands.
The cause of that spill is under investigation, but federal officials have said the pipeline was likely initially damaged by a ship's anchor.
EMBED More News Videos

Gov. Gavin Newsom has declared a state of emergency in Orange County to help mobilize state resources to clean up the oil spill off the coast.