A mandatory evacuation order has been issued for those living on Coronado Pointe Drive, Vista Court, and Via Las Rosas.
KABC
By Jory Rand and Jessica De Nova 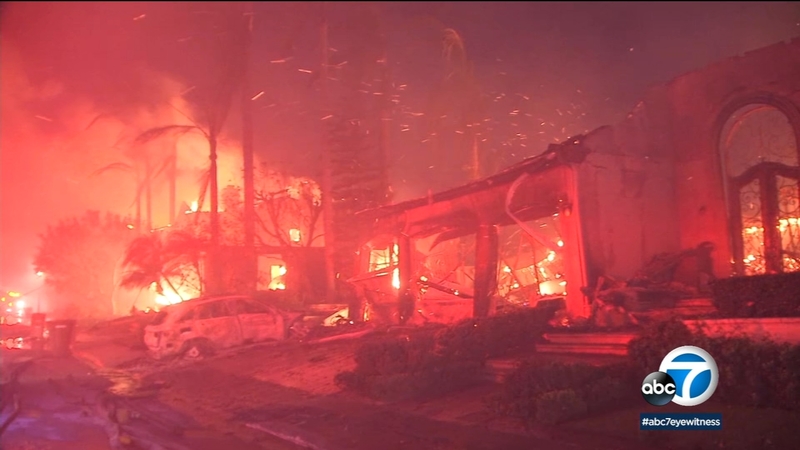 The fire broke out Wednesday afternoon between Laguna Niguel and Laguna Beach near a water treatment plant, according to the Orange County Fire Authority, and quickly erupted in size.

The fire exploded from about 30 acres at around 5 p.m. to 200 an hour later. It ultimately made its way over Pacific Island Drive.

A mandatory evacuation order has been issued for those living on Coronado Pointe Drive, Vista Court, and Via Las Rosas.

Deputies with the Orange County Sheriff's Department estimate there are about 100 structures across those areas. All roads leading up to those streets are closed.

Meanwhile, an evacuation warning issued for the Balboa Nyes (Portafina) neighborhood was lifted.

Several homes overlooking the ocean in Laguna Niguel are engulfed in flames as a fast-moving brush fire spread rapidly amid strong winds.

Fire Chief of the Orange County Fire Authority Brian Fennessy said though the structure count has not been fully determined yet, he believes about 20 homes have been destroyed.

As firefighters worked to put out major hotspots, Fennessy said the strong winds were blowing embers into the attics, making it harder for them to get through.

"You've got to remember that this fire was wind-driven," said Fennessy during a Wednesday evening news conference. "We have embers cast very deep down into those canyons, many of them up into those palm trees. We had embers in our attic spaces, through vents. The focus is to get into these homes and to really take a look into those attics, to get down in the vegetation, to really make sure we're not leaving any hot embers in place."

Fennessy said there have been no reports of any injuries.

Crews continued battling the fire into the night.

Officials said residential areas near the fire will be impacted by smoldering.

They said winds from the west will push smoke over Santiago Peak towards the east, and once the smoke is over the mountain peaks, it'll mostly stay aloft during the overnight hours, causing little impacts further downwind.

An evacuation center has also been created for those seeking help.

Residents in the area can visit the Crown Valley Community Center at 29751 Crown Valley Parkway for assistance. The Orange County Emergency Operations Center has also created a public information hotline to respond to questions from residents. You can reach them at 714-628-7085.

Orange County Fire Authority Chief Brian Fennessy gives a 6 p.m. update on a fire that has burned hundreds of acres and destroyed homes in Laguna Niguel.