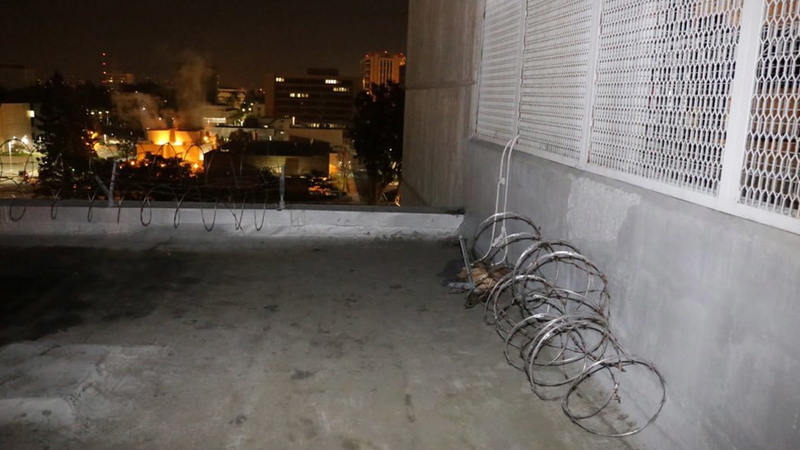 SANTA ANA, Calif. (KABC) -- Eyewitness News got an exclusive look at the planned escape route taken by three inmates who broke out of a maximum security jail in Santa Ana

Orange County sheriff's deputies say a section of barb wire on the jail roof was cut and pulled back. Authorities believe that's where inmates Jonathan Tieu, 20, Bac Duong, 43, and Hossein Nayeri, 37, used makeshift ropes to rappel to the ground.

The three men were last accounted for around 5 a.m. last Friday. Jail authorities realized they were missing by 9 p.m. Orange County Sheriff Sandra Hutchens said she believes the men definitely had help from the outside.

She also said she believes Nayeri was the mastermind behind the escape plan.

As far as the jail itself is concerned, Hutchens said the aging facility presents challenges. The jail's only outdoor recreational space for inmates is on the roof. State law requires inmates to get three hours outside per week.

"Our other facilities have outdoor recreation. We would not have to take them on the roof. We don't like to do it, but we have no choice," Hutchens said.

Hutchens announced on Wednesday that five arrests have been made in connection with the escape. She said deputies will likely be making addition arrests on Thursday.

Details on the arrests were not released so as not to compromise the investigation.

The sheriff expressed her frustrations about the escape and said immediate changes have been made following the escape.

"We're doing the same number of counts, but it's the quality of the count. It's confirming that the inmate is where they're supposed to be," Hutchens said.

Two of the fugitive inmates, Duong and Tieu, have known connections to an Asian gang.

"They have ties to that area and to that gang, so that's what we're focusing on. That's why we're putting pressure on that gang and those gang members," Hutchens said.

The sheriff released new photos of Duong, who has several distinctive tattoos on his chest and back.

Hutches said she wants the community to know that teams are working nonstop to bring these men back into custody.

"We're going to find them. We're not going to stop until we find them. These are very dangerous people," she said.

A $200,000 reward is being offered for information leading to the arrests of the three escapees, who should be considered armed and dangerous.