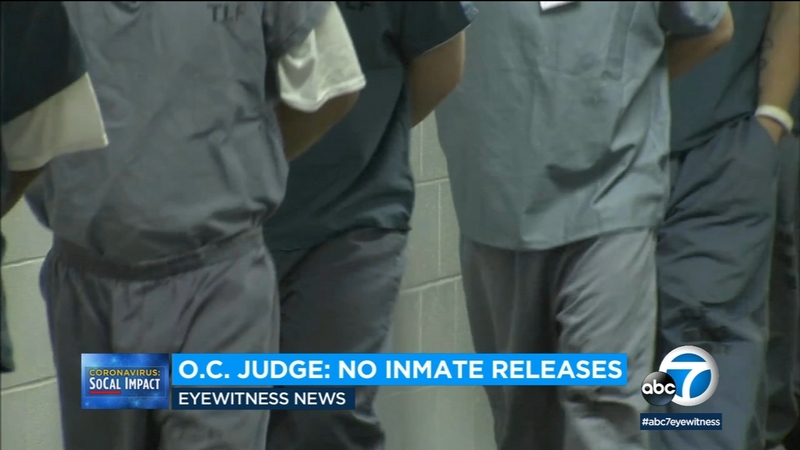 SANTA ANA, Calif. (CNS) -- A judge who previously ordered that Orange County's jail population be cut in half to better comply with physical distancing to help contain the spread of COVID-19 said Tuesday he is satisfied with what Sheriff Don Barnes has done so far and that it is not necessary to release any inmates at this time.

"The situation today is that I cannot conclude that the sheriff has not substantially complied with both the letter and intent of the Dec. 11 order" to halve the jail population, Orange County Superior Court Judge Peter Wilson said.

The judge acknowledged that "the facts have developed significantly since the hearing on this matter in December, which resulted in the Dec. 11 order and clarification order that followed.''

An outbreak at the jail in December led to nearly 1,250 inmates getting infected and two dying.

As of Tuesday, 13 inmates were infected, including seven newly booked inmates, according to sheriff's Sgt. Dennis Breckner. One inmate was hospitalized and officials were awaiting 334 test results.

RELATED: OC sheriff ordered by judge to reduce county's jail population by half amid COVID pandemic

Sheriff's officials have been moving inmates around to unused facilities and utilizing cells for eight inmates to house just two at a time, for example, to achieve the goal of physical distancing required by Wilson. The Women's Central Jail, which had been shut down until recently, is being used to quarantine infected or exposed inmates.

"I am trying as much as possible to base my decisions here on medical science rather than an instinctive reaction to the facts at hand... and the (state prison) guidance does permit cohorting in small numbers, where, for example it is two people to a cell if other measures are put in place," Wilson said. "Since the initial hearing, the sheriff has put in place a number of additional protections not in place at the time."

Those measures include increased testing and quarantining of inmates, Wilson said, adding that "the way in which people are being transported to the courts and the drastic reduction in traffic to and from the courts" have had an impact.

"I recognize that full isolation is impossible," Wilson said, noting, for example, that there is no way to prevent jail staff from spreading the virus asymptomatically.

Barnes' attorneys speculated that the outbreak in December may have stemmed from inmates getting infected from a trip to the courthouse, Wilson said.

The Orange County sheriff and district attorney are fighting a court order to release half the county's jail population amid a COVID-19 surge.

"There was a wildfire in the jails because of the congregant housing,'' Wilson said. "That congregant housing has been addressed to the extent that is reasonably expected under the circumstances ... by redistribution of the (jail) population ... This does not moot the lawsuit or moot the issues, but what it does establish is that as of this date, I am satisfied the sheriff is acting in substantial compliance with the court's order in reducing and managing the jail population to achieve or get close to a 50% reduction."

Wilson, however, told the sheriff to submit another updated report next month. A hearing was scheduled for March 26 to receive an update on the situation. The judge wants to hear more details about the physical distancing being done among two-person cells.

Attorneys for the American Civil Liberties Union, which filed the lawsuit, complained that the sheriff had not done anything to comply with the judge's order. They continued their request for an independent monitor to determine which inmates could be released to reduce the jail population.

Attorney Kevin Dunn of the county counsel's department complained that the ACLU has continued to issue new demands that have strayed from the original objective of the lawsuit. He argued for a dismissal of the lawsuit so the ACLU could file a new complaint.

"It isn't that the goal post keeps moving; it's that there simply is no goal post at all," Dunn said.

For instance, he pointed to one argument from the ACLU that the Pfizer and Moderna vaccines are 95% effective at preventing illness.

"It still wouldn't be good enough" to vaccinate every inmate, Dunn said. "There is nothing the jail could do to get out from this lawsuit ... The bottom line is the court gave us an opportunity to demonstrate we could achieve 50% reduction ... and we delivered in spades."
Report a correction or typo
Related topics:
orange countyjailcoronavirus orange countyorange county sheriff's department
Copyright © 2022 by City News Service, Inc. All Rights Reserved.
TOP STORIES
LA County could hit 'high' COVID level in July, prompt return of masks
Here's what to know about the end of CA's eviction moratorium
California late start law aims to make school less of a yawn
Woman searching for brother reported missing in Redondo Beach
Lawyer: Nipsey Hussle lifted up neighborhood he was gunned down in
Apple's newest CarPlay feature will make buying gas easier
How to save money when buying a new car in an inflated market
Show More
Orange County confirms 1st presumptive case of monkeypox
OC woman attacked and sexually battered inside Irvine storage facility
Silver Lake restaurant offers free food in exchange for Sriracha
USC, UCLA moving from Pac-12 to Big Ten in 2024
Slain El Monte officers: Honoring 2 loving fathers and valiant heroes
More TOP STORIES News