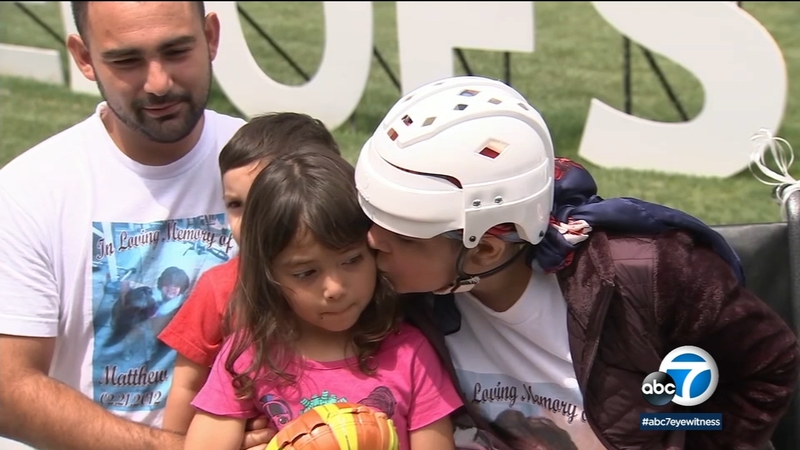 ORANGE, Calif. (KABC) -- Blanca Tamayo, the sole survivor of the mass shooting in Orange that killed four people, including her two children, was released from the hospital Wednesday.

With her son and grandchildren by her side, Tamayo says the support of her family and medical team at UC Irvine Health are behind her quick recovery.

"I'm thankful to God for that and for my family," an emotional Tamayo said outside the hospital.

Tamayo was one of five victims on that tragic day in late March. Two of the victims were her children, her daughter and 9-year-old son.

Tamayo says her son, Matthew Farias, is now an angel of God.

Blanca's other son, Luis Tovar, lost his father, sister and brother, but says he finds strength in those who need him now.

"My mother is what gives me a lot of strength because I know she's going to need a lot of help in the next coming months to years, as well as my children, and my family," Tovar said. "We're all just staying strong together."

Doctors agree that Tamayo has a long road ahead of her.

She's been through brain surgery. Fragments of her skull were removed after two bullets went through her head.

"Gunshot wounds to the head have a particularly bad outcome. Again, I would say this is a great outcome, and I think we can only expect to see more and more improvements as time goes on," said Dr. Michael Lekawa, the director of the UCI Health trauma center.

For now, the family hit with so much pain is focusing on what they call a miracle and are looking forward to spending Mother's Day together.

"I'm just happy to have her back," Tovar said. "We're excited to spend Mother's Day with her."

Doctors at UCI Health say with injuries that Tamayo suffered, it is difficult to know her long-term prognosis, and it won't really be known until about six months to a year out.

A GoFundMe page has been set up to help Tamayo and her family. To donate, click here.

The shooting suspect, Aminadab Gaxiola Gonzalez, was charged with four murder counts and three attempted murder counts for firing at two officers who shot and wounded him when he fired at them with his handgun, and for critically wounding Tamayo.

He won't be arraigned until he is able to clearly speak to his attorneys after being hospitalized.