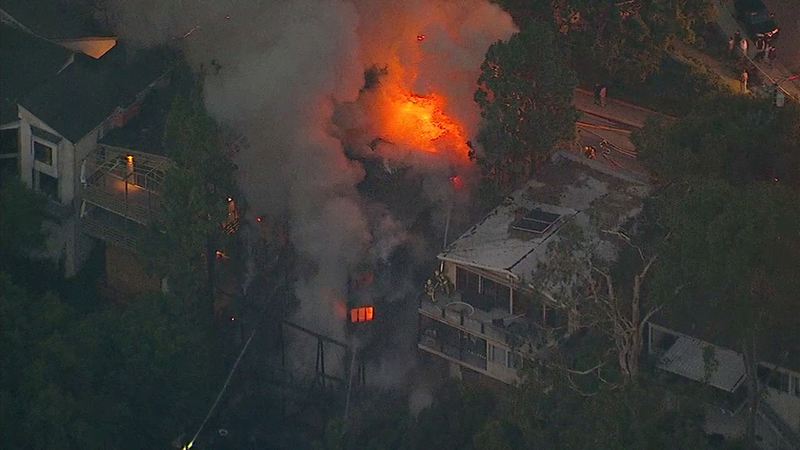 The inferno erupted shortly after 5 a.m. at a hillside home in the 800 block of Las Casas Avenue, just north of Sunset Boulevard, according to the Los Angeles Fire Department.

"Flames were just shooting out of the house," said neighbor Melody Roset, who ran to help one of her neighbors evacuate. "Because the houses are so close, you don't know how quickly it could move."

The intensity of the flames initially forced LAFD personnel to take a defensive position. About 90 firefighters knocked down the fire just under two hours after it started.

No one was injured, including the owner who was home at the time of the incident. In an interview, he told ABC7 that he was awakened by the sound of shattering glass.

"I'm so glad that John is safe -- that's all I care about," said his friend Elisa Hunziker, who also lives in Pacific Palisades. "First thing, I came not to see the house, I came to see how I could help."

An LAFD arson investigator was seen examining oil cans as part of an investigation on the property.

The homeowner said he had been in the process of re-staining his wooden deck. Firefighters believe the combustibles, possibly gathered on rags, may have ignited the fire.

"Those rags, if they're left in a pile, can create their own heat and they can ignite and start their own (fire) without a spark," said fire department Capt. Erik Scott.

On April 13, a blaze erupted at the home of a Swedish reality star on the same narrow street.

Firefighters on Wednesday were able to prevent the flames from spreading to neighboring structures, positioned just a few feet away.