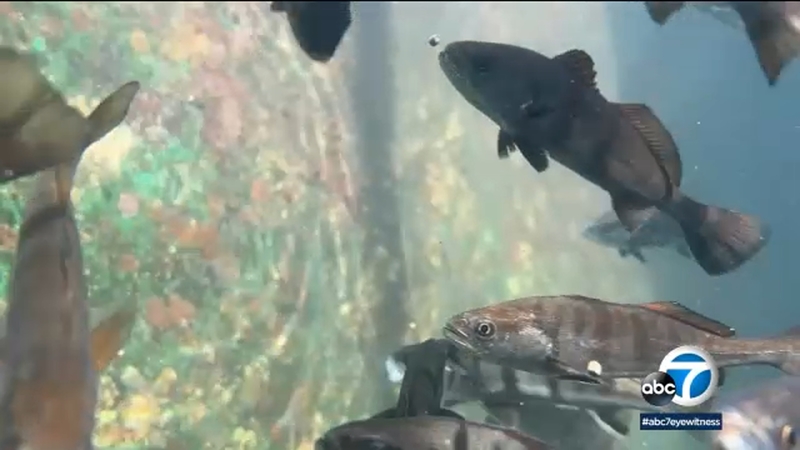 NEWPORT BEACH, Calif. (KABC) -- Pacific White sea bass used to be abundant off the coast of California, but their popularity led to overfishing. One volunteer program is raising them and putting them back in the ocean.

The group's Pacific Fisheries Enhancement project was started nearly 30 years ago to help save the hugely popular game fish that once flourished off our coast.

"The Pacific White sea bass is a tremendously good table-fare fish. The fish itself will grow over 88 pounds and can be up to 6-feet long. One fish can provide a lot of meat for stores and restaurants around the world."

However, that popularity nearly drove the White seabass to extinction in the 1980s.

Efforts to bring the species back spawned nursery pens, stocked each year with thousands of seabass fingerlings - spawned at the Hubbs-SeaWorld Research Institute facility in Carlsbad and raised in Orange County waters.

They'll be released in the spring once they grow to about eight inches.

It's just one of more than a dozen nursery pens speckling the coast from Ventura to San Diego. The juvenile sea bass are fed and cared for by volunteers like Mark Berdine.

"Anything we can do to make the fish healthier, makes the oceans healthier, is worthwhile," Berdine said.

Over the past several decades, the number of seabass that graduated from the network of California nurseries has been astronomical.

Whether or not the program has been working is up for debate, but for now, the folks at the Balboa Angling Club will continue raising their fingerlings and angling for a future rich with sea bass.