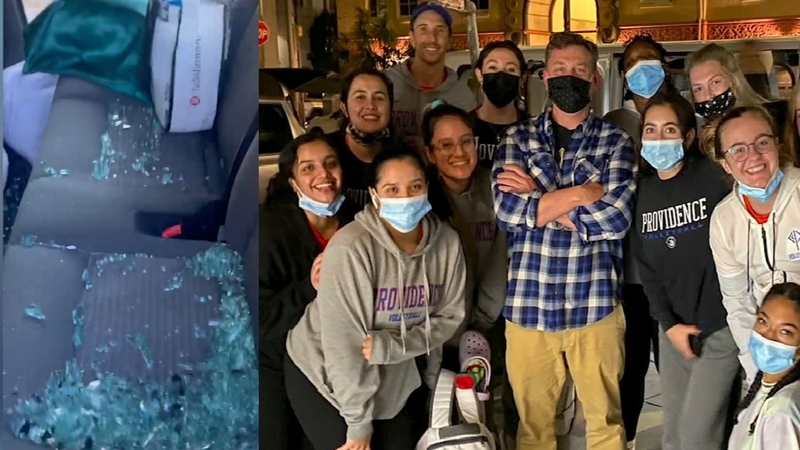 SAN FRANCISCO (KABC) -- A Pasadena women's college volleyball team is grateful for Bay Area neighbors who helped them after a devastating smash-and-grab where nearly 10 suitcases were stolen before a big match.

"It was traumatizing!" says one player from Providence Christian College women's volleyball team. She spoke from a parking lot on their way to the next game in their Northern California tournament schedule.

The team from Southern California was preparing for a Thursday morning match against Simpson in Redding when they made a pit stop at Land's End in San Francisco to do some sightseeing and hiking.

While their coach, Chris Chown, advised the women to take their wallets, laptops and jerseys with them, they were surprised when they returned to the van to discover it had been broken into. Nearly 10 suitcases belonging to team members were gone, with glass scattered everywhere.

But for this team, whose core values are "Gratitude, Ownership, Humility and Heart," a few women started to dance and rap about their misfortune! It was documented by one teammate who vlogged the entire incident.

When asked why they were so upbeat so quickly after being broken into, one player smiled, "We were just trying to lighten up the mood as a team... just trying to cheer each other up."

Little did the team know though, later that day just a few blocks away, a woman would come across their discarded belongings. She then called on her neighbor Mark Dietrich to help.

"I zipped over to the location, scooped it up and began looking through for clues to who it belonged to," says Mark, who is very active on his neighborhood's Nextdoor social media page and often reunites people with their discarded and stolen belongings.

"Luckily there was a college volleyball team training notebook with the girls' numbers in it."

A few phone calls later and hours of hassle and waiting to get new vans, the team finally arrived to meet Mark at his Richmond District home late Wednesday night to claim their things. Surveillance video shows the women bounding out of their van chanting and cheering for Mark.

Mark hopes that by sharing this story, it'll inspire others to lend a hand and take the burden off SFPD.

"Really, I do this to motivate more neighbors and inspire and encourage other neighbors to do it. When you see that pile of stolen luggage, don't just walk by."

As for the Providence Christian College Sea Beggars, even though they lost their game against Simpson on Thursday morning, their coach says they all won at another life lesson.

"We could have gotten mad at each other, responding poorly. They kept turning toward each other, were positive and kept fighting... we're just proud the way they responded as a group."

The Sea Beggars have two more games in their tournament schedule before returning back to Pasadena.