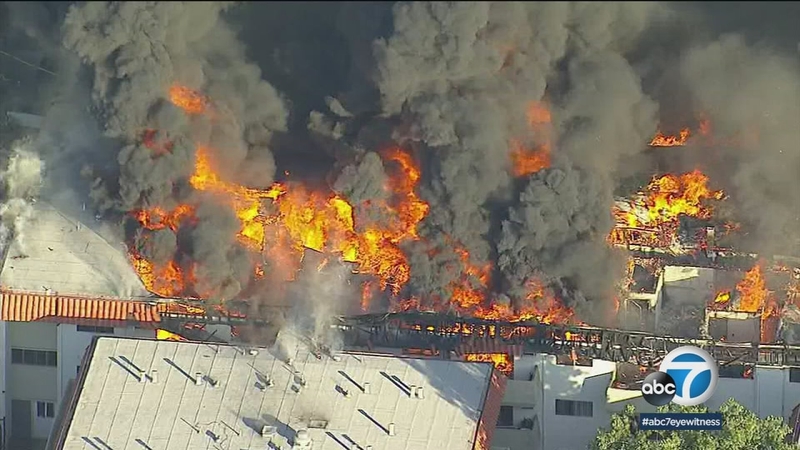 PICO RIVERA, Calif. (KABC) -- About 300 residents were evacuated from a Pico Rivera apartment complex after a third-floor unit erupted in flames that quickly spread through the building Thursday.

The fire started around 3:30 p.m. in the 9100 block of Burke Street. The fire appeared to have started in a vacant room and then spread through the rest of the building.

Tenant Jesse Aguilar witnessed the fire erupting in the third floor room. He said he grabbed a fire extinguisher and tried to put the flames out himself.

"By the time I got there, the flames were already too much. I saw the whole side of the wall just catch on fire. I started spraying the fire extinguisher on it and it was just too much. After I did that, the ceiling came down and when it came down that's when the fire department told me to evacuate," he said.

He said he went and ran to other units to tell people to evacuate, and that he even scared children in order to get them to get away from the fast-moving fire.

Authorities said two people were taken to a nearby hospital for smoke inhalation, while a firefighter was transported for heat exhaustion.

At least 220 firefighters were surrounding the burning building in an attempt to quell the flames and save some units. Authorities said at least 45 units were destroyed or damaged by smoke and fire, authorities said.

A total of 141 apartment units were affected in other ways, such as loss of power, by the blaze, fire officials said.

Another resident, Rebecca Slay, had been at the complex for 22 years and said she, her husband and dog escaped, but they left without needed supplies like her cane, insulin needles and dog food.

"It's very scary. I've been just trembling. I've been so nervous because I want to be back in my home," she said. "Real scary. Real scary. But thank God that we made it out."

Thick black plumes of smoke went into the air and people reported seeing it a few miles out. At one point, much of the roof collapsed into the destroyed units.

The "H" shaped building was connected by hallways. The fire was running through the attic and appeared to be in the first and second floors.

Residents from the complex were evacuated. Those who need shelter were advised to go to the Rivera Park Auditorium at 9530 Shade Lane and small pets are allowed.

One resident, Kevin Escalante, said he rushed home to make sure his wife and baby were OK when he received a call about evacuations.

"It was pretty terrifying. I work all the way in Jurupa Valley so I was trying to get here in time, especially through traffic," he said.

He added that his wife was in the apartment next door and she, their baby and their dog got out safely.

Fire officials said they believe crews will remain at the site overnight to knock down the blaze and put out any hot spots.