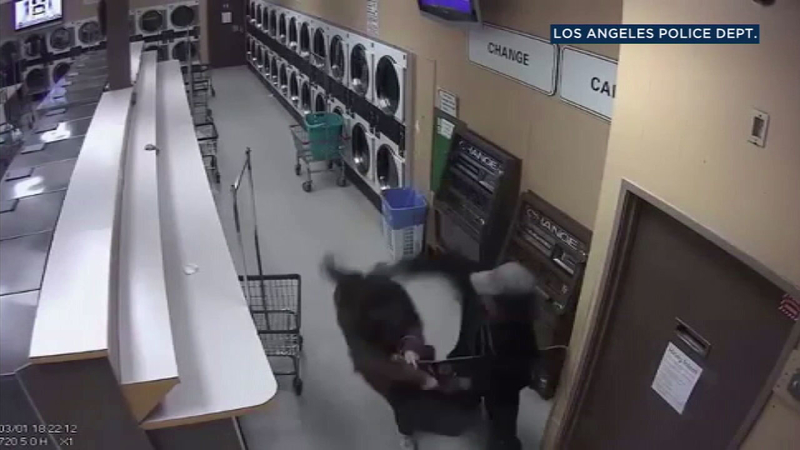 PICO-UNION, LOS ANGELES (KABC) -- The Los Angeles Police Department is searching for an alleged robber accused of attacking a woman at a Pico-Union laundromat.

Police said the man came up behind a 40-year-old woman, slashed her throat with a sharp object and ran away with her purse. The victim fell to the ground, and the suspect fled the location. The horrifying scene was caught on surveillance cameras.

The vicious attack happened shortly after 6 p.m. Thursday at a laundromat near Vermont Avenue and Venice Boulevard.

The victim sustained a laceration to the neck, which required surgery.

In surveillance photos you can see the suspect has a goatee and was carrying a skateboard.

A suspect accused of slashing a woman's throat and stealing her purse at a Pico-Union laundromat on Thursday, March 1, 2018.

The suspect is described as a Hispanic man between 25 to 35 years old. He's believed to be 5 feet 5 inches tall and around 170 to 180 pounds. He was wearing a gray baseball cap, all black clothing and black shoes with white soles.

The victim told investigators she has no idea who he is.