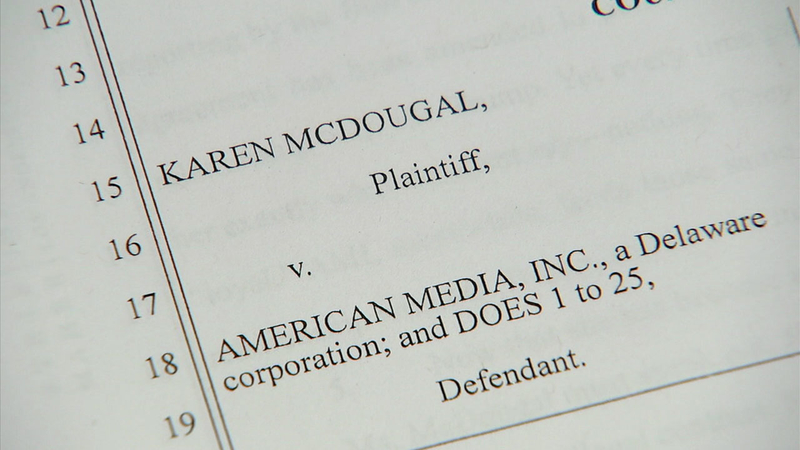 In a lawsuit she filed, she said she was duped into selling her story to American Media Incorporated, which owns the National Enquirer and other publications. Her complaint states instead of her story going public, it was buried because her own attorney sold her out.

"The lawsuit is alleging that Miss McDougal's prior lawyer was not acting in her best interest and conspired or colluded with the Trump team, so to speak," ABC News legal analyst Dana Cole said.

McDougal is asking the court to nullify the deal with AMI, but on Tuesday afternoon, AMI issued a statement that said McDougal has been free to talk about her relationship with Trump since 2016.

In addition to the statement, a New York Supreme Court judge ruled Trump does have to face a defamation lawsuit. The suit was filed by former "Apprentice" contestant Summer Zervos, who said Trump sexually harassed her in 2007.

"I want Mr. Trump to know that I will still be willing to dismiss my case against him - immediately - for no monetary compensation if he would simply retract his false and defamatory statements about me and acknowledge that I told the truth about him," Zervos said during a press conference last year.

Since that time, Trump's attorneys argued that a president has immunity from such lawsuits. But Judge Jennifer Schecter ruled that a "sitting president is not immune from being sued in federal court for unofficial acts."

The president's attorneys must respond within 10 days.

The attorney for Stormy Daniels tweeted Tuesday a photo of Daniels taking a lie detector test in 2011. A publisher requested the polygraph to verify an interview with Daniels about her relationship with Trump.