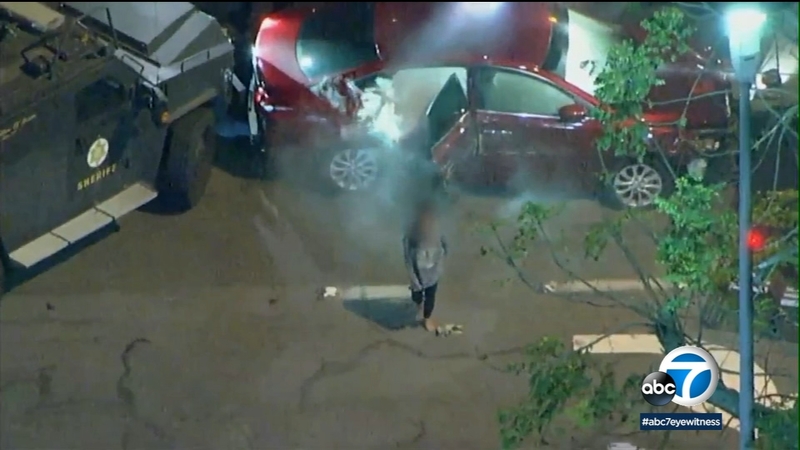 DIAMOND BAR, Calif. (KABC) -- Following a violent chase Tuesday evening through the San Gabriel Valley and a lengthy standoff, a woman was taken into custody after deputies injected tear gas into the vehicle. A 9-year-old girl also emerged from the backseat as the standoff ended.

The suspect first led authorities in a reckless chase and smashed into multiple vehicles, dodging PIT maneuvers while fleeing authorities.

The suspect in a Nissan four-door sedan fled at high speeds, weaving through traffic, blowing through red lights and crashing into several cars in the effort to escape.

By the end of the chase, the car was dragging its rear bumper along as it continued to flee.

At several points, the suspect was trapped in traffic, and chose to smash cars aside in an effort to get through the jam.

A driver smashed through a traffic jam in an effort to escape during a reckless chase through the San Gabriel Valley.

The chase came to an end around 4 p.m. in Diamond Bar as the driver came to a stop after hitting several cars.

SWAT vehicles took up positions in front and in back of the sedan as the standoff stretched into its second hour.

Officers then inserted a tear gas canister into the vehicle to try to get the driver out. A young girl then emerged from the car, followed by the woman.

Authorities took the 30-year-old woman into custody. LASD Lt. Todd Knight said they weren't aware the girl was inside the car.

The relationship between the girl and woman is unknown.

When the girl exited, a SWAT officer came to help her. She was transported in an ambulance to be treated.