As civil rights groups call for an end to the use of police dogs, our analysis found in at least 14% of cases involving police dogs reported to the DOJ, officers described suspects as "passively not complying" with orders.
KABC
By Grace Manthey and John Kelly 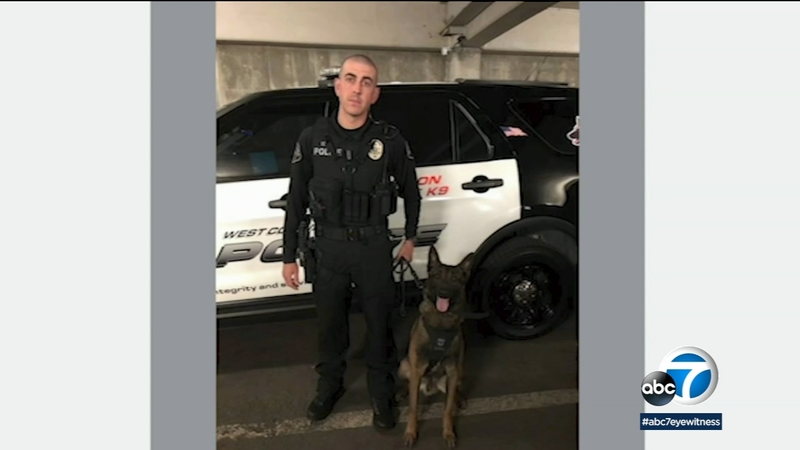 Her experience is among the growing number of instances that has civil rights groups calling for an end to the use of police dogs to apprehend suspects during arrests.

"I know their life is on the line too, I understand that," said Frausto, while fighting back tears. "But for them to do what they did to me? No, that's just mean."

Frausto said she had been experiencing homelessness and had gone inside the post office to sleep.

"I just remember being woken up. I was woken up by a dog," Frausto said. "He was pulling, biting, pulling, and biting. I just started screaming and then I thought, 'When am I going to die?'"

Officers charged Frausto with a misdemeanor for resisting, delaying or obstructing a police officer. The criminal complaint against her mentions nothing about the alleged burglary that brought police to the post office.

"My intention was to take the suspect into custody in the safest manner possible for everyone involved," explained K-9 handler Iside in his report describing his arrest of Frausto. "Suspects can control and minimize the force needed to arrest them, if they were to just surrender."

Frausto, who maintains she was sleeping and would have surrendered had she been aware of the officers' presence, is now suing the department for excessive force.

"She did nothing wrong," said DeWitt Lacy, a civil rights attorney with John Burris law who is representing Frausto in her civil lawsuit. "I don't believe in the criminalization of poverty. The treatment Laureen got was almost inhuman. You don't treat a person like that. I don't care who they are."

Using information provided to the Department of Justice by law enforcement agencies around the state regarding incidents involving force and resulting in serious injury or death, Eyewitness News identified 309 incidents involving police dogs from 2016 to 2019.

Restraint holds, firearms, other types of physical contact such as a fist, and electronic devices were more often referenced in those reports.

Guidelines from the California Commission on Police Officer Standards and Training states, "the officer's use of force must be proportionate given the totality of the circumstances; it is not proportionate if a less injurious alternative existed and could be safely employed."

Additionally, a report released in May 2020 by the Police Executive Research Forum offering guidance to law enforcement agencies on the use of patrol K-9s echoed that directive and stated, "When possible handlers should consider alternative tactics before deploying a canine."

Despite these guidelines, an Eyewitness News analysis found in at least 14% of cases involving police K-9s reported to the Department of Justice, officers described the suspects as "passively not complying" with orders. They were not described as combative or running from police.

Such was the case with Frausto.

"In a lot of the cases you are talking about, there isn't any sort of present threat of death or serious injury to anybody else," said Adrienna Wong, a senior staff attorney with the American Civil Liberties Union of Southern California.

"The other thing about dogs is that they are inherently escalating. They lead to more force. When a dog is mauling someone, most people, their natural instinct is to try to fight off the dog or to just push them away from them. And in case after case, what we see is police using that natural reaction as a justification to use additional force against people," Wong said.

Wong also expressed concerns about the frequency in which minorities are the targets of incidents involving K-9s.

"I think it's important to note that police attack dogs trace their origins to slave patrols," Wong said. "We think that it is high time for this antiquated and frankly racist practice to just end."

We found the West Covina Police Department reported more incidents involving police dogs that resulted in injury or death per 100,000 people than any other city agency in the Los Angeles region.

The West Covina Police reported 9.3 incidents per 100,000 people, according to our analysis of data from the Department of Justice and the U.S. Census.

Table not displaying correctly? Click here to view in a new window.

The West Covina Police Department also reported the third highest number of incidents per 100,000 people out of every city agency statewide reporting more than one incident.

"I don't think the West Covina Police Department should sanction this behavior," Lacy, the civil rights attorney, said. "Hopefully we can get some policy changes."

In their legal response to her civil lawsuit, the department denied accusations of excessive force.

Eyewitness News also reached out to the Los Angeles, Santa Monica, Ontario, Vacaville and Richmond Police Departments referenced in this report. None returned requests for comment.

Don Slavik, executive director of the United States Police Canine Association, estimates there are roughly 15,000 police K-9s in the country who serve a variety of functions not always including suspect apprehension. Some K-9s specialize in explosives, narcotics and cadaver detection.

Slavik maintains there is a need for apprehension K-9s in the U.S.

"The long answer involves understanding the types of deployments (searches) law enforcement canine officers are expected to perform in the U.S. These could range from a misdemeanor to an armed suspect. Police work can be dangerous and unpredictable. Couple that with the number of suspects carrying weapons, and you can see the danger," wrote Slavik in a statement. "The United States Police Canine Association is an association based on certification standards and training. We continue to look at the use of police canines, keeping informed on legal and community concerns."

Frausto said she hopes her experience will encourage agencies to rethink how often they utilize police dogs during apprehensions so that other individuals do not have to live with the permanent damage she says she now endures.

"I want to know why, why did they do this to me," Frausto said. "I've always listened to cops. If I was wrong, I was wrong. But I am not guilty today."

A spokesperson for the Los Angeles County District Attorney's Office said the misdemeanor charge against Frausto is now under review.