ABC reporter Rachel Scott confronts Putin over crackdown on opponents: 'What are you so afraid of?' 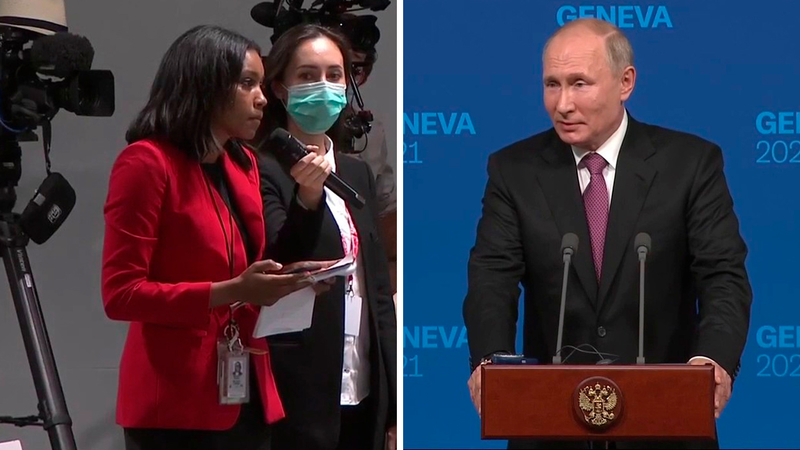 "The list of your political opponents who are dead, imprisoned, or jailed is long ... and you have now prevented anyone who supports [Russian opposition leader Alexey Navalny] to run for office," Scott said. "So my question is, Mr. President, what are you so afraid of?"

Putin responded by describing the organization founded by Navalny, whom he did not name, as "extremist" in nature and said it had called for "mass disorder" and breaking laws.

Putin then referenced Black Lives Matter protests and said there was "disorder" and "destruction" in the US after the death of George Floyd, whom he also did not name. Putin said that Russia felt "sympathy" for the US and doesn't want such demonstrations to happen within its borders.

"If all your political opponents are dead, in prison, poisoned - doesn't that send a message that you don't want a fair political fight?" Scott pressed.

Putin then invoked the January 6 attack on the US Capitol, suggesting a false equivalence between the insurrectionists arrested for rioting and the political opponents of Putin imprisoned in Russia.

"As for who is killing whom and throwing whom in jail, people came to the US Congress with political demands," Putin said. "They face prison sentences of up to 20, maybe even 25 years."
"They are being called 'domestic terrorists.' They are being accused of a number of other crimes," he added.

A Russian court ruled last week that two organizations linked to Navalny are "extremist" groups, drawing condemnation from the US. The decision by the Russian court meant that members of the groups cannot run for office in upcoming elections.

Navalny, who was poisoned in 2020 and duped a Russian spy into revealing how he was targeted, has been in prison since earlier this year for allegedly violating the probation terms of a 2014 case in which he received a suspended sentence of three and a half years. His health has worsened and been a matter of concern in the international community.

Ahead of the summit, Biden warned Putin that the death of Navalny would "be another indication that Russia has little or no intention of abiding by basic fundamental human rights."

At his own press conference after the meeting with Putin, Biden reiterated that the consequences for Navalny's death would be "devastating for Russia."