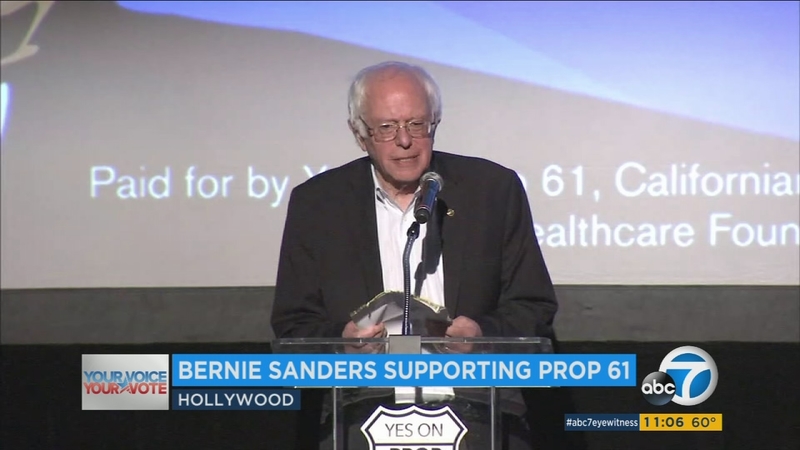 HOLLYWOOD, LOS ANGELES (KABC) -- With Election Day around the corner, Sen. Bernie Sanders campaigned in Hollywood in support of Prop 61, which aims to lower the price of prescription drugs.

An enthusiastic crowd greeted Sanders at the Hollywood Palladium on Sunday. The former presidential candidate is taking part in several rallies in support of Prop 61, hoping to convince California voters to approve the measure.

"You are exposing to the world just how greedy the pharmaceutical industry is," Sanders said.

Prop 61 would require the state of California to negotiate for drug prices similar to those paid by the Department of Veterans Affairs. Supporters say it would help lower the skyrocketing cost of prescription drugs.

A documentary examining the pharmaceutical industry was aired during the rally. Rally attendee John McDonald, of Agoura Hills, said he waited months get on a program that would provide him with free medication.

Proposition 61 prohibits state from purchasing prescription drugs at a price higher than those bought by the USDVA. Get more information from this video from SeePolitical.

"I've had Hepatitis C for probably 25 years. I wouldn't have been able to buy it," McDonald said.

Fellow rally attendee Hollis Evans of Los Feliz said if Prop 61 is approved in California, it can be done in other parts of the country.

But many oppose Prop 61, arguing that some Californians could end up paying higher prices for drugs.

"Voters are concerned about drug costs. They're angry, but Prop 61 isn't the answer. It's not a good policy," said Kathy Fairbanks with the group, No on 61.

Sanders says pharmaceutical companies are making billions of dollars in profit while people struggle to pay for potentially life-saving drugs.

"What they are saying to the people of California - we control what goes on. We will charge you any damn price we want. There is nothing you can do about it. Well on Tuesday, there is something you can do," Sanders said.

Sanders is expected to attend two rallies on Monday - one in downtown Los Angeles and another in Sacramento.