Some key city and county officials in Los Angeles are calling on Sheriff Alex Villanueva to resign.
KABC
By ABC7.com staff 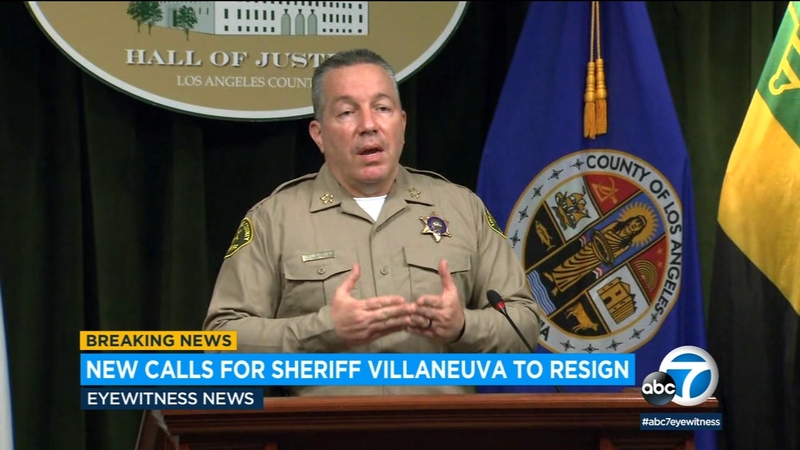 Those calling for the elected sheriff to step down include county supervisors Mark Ridley-Thomas and Sheila Kuehl, as well as Los Angeles City Councilman David Ryu.


"I gave him a shot from the beginning and he has blown it consistently," Ridley-Thomas said. "The reason for calling for him to resign or step down is to communicate to him in the strongest of terms we are fed up with the way he's conducting business and it's harmful to the people of the county of Los Angeles."

Sheriff Villanueva has blocked investigations, violated the law, and refuses accountability in the #LASheriff’s department. He is not fairly serving the people of LA County. He must resign. https://t.co/uOyZOCyLwz

Since the sheriff's position is elected, the only way to remove him from office is by a recall effort or voting him out in the next election.

Complaints against Villanueva, who was first elected two years ago, include his efforts to reinstate a deputy who was fired for domestic violence allegations against a fellow deputy; conflicts over transparency and budgeting; and allegations of misconduct by deputy "gangs."

The latest conflict comes as the department comes under intense scrutiny in a national environment of protests over law enforcement-involved use-of-force incidents. In Los Angeles, the department has faced scrutiny over fatal shootings involving Andres Guardado and Dijon Kizzee.

Kuehl told the Los Angeles Times Villanueva costs the county millions of dollars in claims of excessive force by members of the department.


"He is really a rogue sheriff,'' Kuehl said. It is really important for this sheriff to understand that his behavior, his violation of any of the common rules that govern a law enforcement agency, is the greatest threat to public safety.''

The commission also expressed doubt over the sheriff's version of events leading to the arrest of a local reporter and asked county attorneys to prepare a report on legal responsibilities involved in law enforcement activities at protests.

Some members of the civilian commission that oversees the Los Angeles County Sheriff's Department are also calling for Villanueva's resignation.

At a hearing Thursday, commission member Robert Bonner -- a former federal judge and former head of the U.S. Drug Enforcement Administration -- first put forward the idea, saying the members of the department "deserve better."
"It's with great reluctance that I'm calling for Sheriff Villanueva to resign," Bonner said. "I don't take this step lightly. I only do so because it's become apparent that he has demonstrated on occasions that he lacks the judgment needed to be the sheriff and he's unable to provide the leadership needed by the sheriff's department."

Vililanueva made it clear he's not going anywhere.


The sheriff responded later in the day, saying the Civilian Oversight Commission was overstepping its role.

"There's a fine line between being a watchdog and a political attack dog," Villanueva said. "That's pretty much the line they've crossed. They crossed the line a long time ago. This is just the latest example of it."
Villanueva also called the commission a "political body appointed by the Board of Supervisors,'' with whom the sheriff has repeatedly clashed on budget and other issues.

"They're just part of the echo chamber of the board,'' the sheriff said. "And unfortunately, the route they take is not one that's going to engender goodwill ... between myself or the organization, because there's a fine line being a watchdog and an attack dog, a political attack dog.''

Next, the commission can formally call for Villanueva's resignation or hold a vote of no confidence at its next meeting.