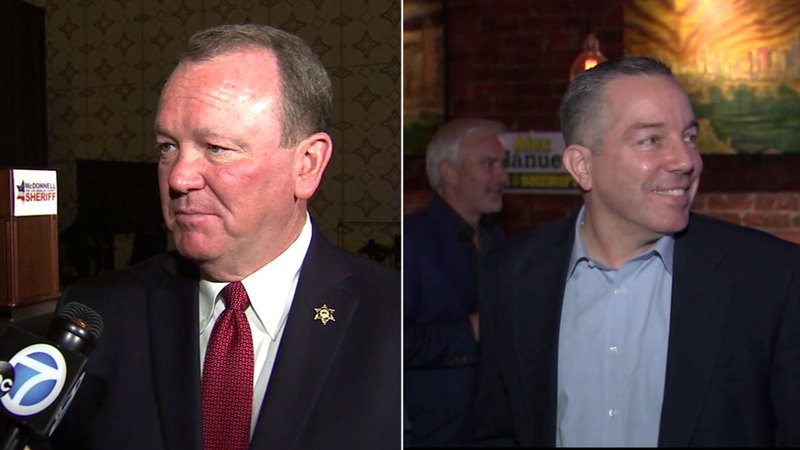 In the tight race for Los Angeles County sheriff, Alex Villanueva declared victory over incumbent Jim McDonnell on Friday, though the sheriff did not concede.

McDonnell has repeatedly said he isn't ready to concede until all the votes are counted. He repeated that again in a statement late Tuesday but said he will "plan to reach out to Mr. Villanueva to discuss an orderly transition, should that be necessary."

"Over a quarter of a million ballots still remain to be counted. I owe it to the more than 1.1 million people thus far who voted for me to follow this through to the end. That is the manner in which I would like to honor those who believe that the Los Angeles County Sheriff's Department is on the right path to reform, transformation, and setting the national standard in 21st century constitutional policing.

I realize that the statistics appear to favor my opponent. I plan to reach out to Mr. Villanueva to discuss an orderly transition, should that be necessary. Meanwhile, in the spirit of the democratic process, I will not yet formally concede until the ballot count has been completed.

There is much at stake in this election. It is of the utmost importance that the positive transformation of the LASD continues, that use of force in the jails continues to decline, and that the LASD stays the course in full compliance with the Department of Justice mandates that are guiding meaningful reform in the jails and in the Antelope Valley. It is imperative that our deputies continue to be trained and held to the highest standards of conduct, and that-in these partisan political times-policing and the Office of the Sheriff be viewed as, and remain, non-partisan."

McDonnell outspent Villanueva, and there hasn't been a Democratic sheriff in L.A. County in 138 years.

Eyewitness News spoke with McDonnell Monday, when he said he was blindsided by the results and was still holding out hope that he will win.

Nearly two weeks after Election Day, Sheriff Jim McDonnell remains behind in the vote count but says he is still "optimistic" about his chances.