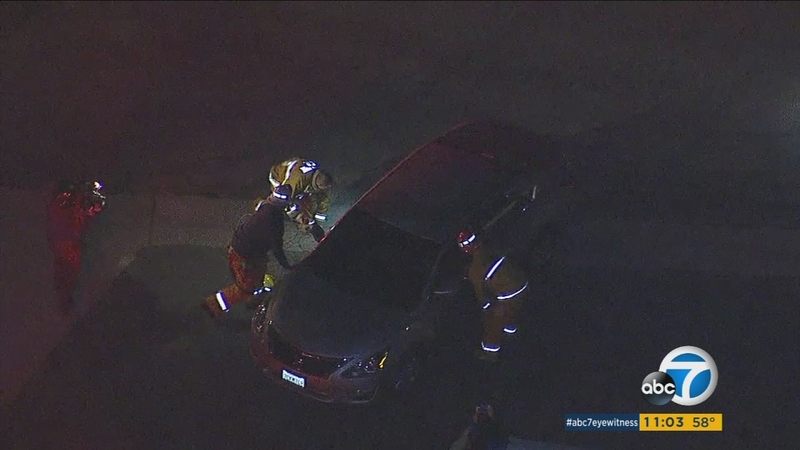 MONTEREY PARK, Calif. (KABC) -- Dorothy Hong was heading home from work in Monterey Park Thursday night when she drove right into a "nightmare."

She heard a noise and thought she ran over something.

She did - power lines that had been knocked down in a crash three blocks away.

Firefighters were already on scene for that accident - said to be caused by an allegedly drunk driver - when they saw Hong in trouble as well.

They warned her to stop her car and not get out. She stayed there for hours while fire crews and utility workers responded.

"The fireman told me, lady you have to stop. Because you run over the power wire. So I stop and then he told me don't get out of the car. Stay here. So I just stay here."

For nearly two hours she sat as crews worked to determine if the wires were live, and if so, shut off the power.

"She was patient," said Division Chief Matt Hallock with the Monterey Park Fire Department. "It was a long time sitting in her car but when someone's in a car and there's power lines we always tell them to stay put until we can verify that these power lines aren't energized."

Eventually power crews arrived and made sure the power was off and Hong was allowed to go home.

Firefighters say if you run over power lines, stay in your car. The ground could be energized as well. But if you have to get out, for example, if the vehicle is on fire, then jump out and land with both feet at the same time.