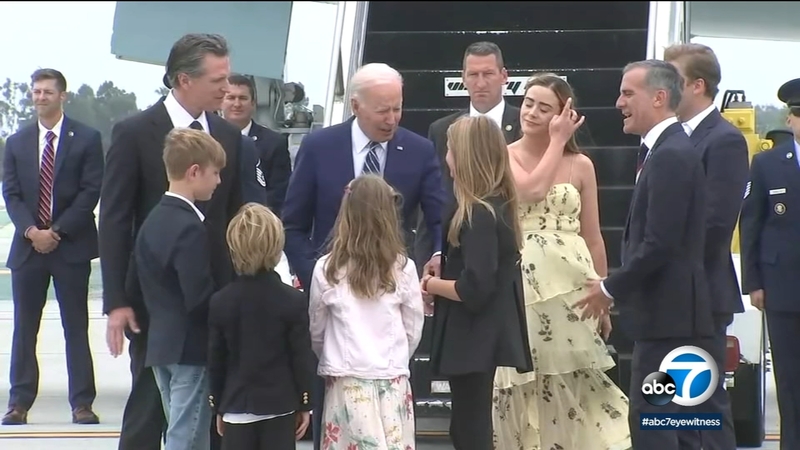 LOS ANGELES (KABC) -- President Joe Biden will be arriving in Los Angeles for the Summit of the Americas Wednesday.

He and first lady Jill Biden are set to host the official opening ceremony for the summit Wednesday at the L.A. Convention Center.

The president will lead three days of meetings with leaders from North, South and Central America, as well as the Caribbean.

The group is expected to discuss global issues including ways to boost economic growth, address climate change and the COVID-19 pandemic.

On Tuesday, Vice President Kamala Harris delivered remarks at an event for the economic empowerment of women in Central America and the Western Hemisphere.

Tuesday afternoon, Vice President Kamala Harris delivered remarks at an event for the economic empowerment of women in Central America and the Western Hemisphere in Los Angeles.

"Our collective expertise, resources and vision can and already has begun to create an echo system of opportunity," Harris said.

Addressing the root causes of migration from Northern Central America is one of the issues President Biden has tasked the vice president with.

There are mixed reviews on her progress so far.

"It's not all her fault," said political analyst Hernan Molina.

Molina said Harris has not been as effective on the issue as the Biden Administration had hoped.

"She has had uneven responses from the countries," he said. "For instance, El Salvador has opted for clearly not meeting or not playing or partnering with United States."

Molina attributes part of the problem to a historically more domestic approach to the topic.

"It has reinforced the idea in Latin America, that the United States looks to Latin America as that less than important neighbor, when in reality, it's a huge market that has a lot of potential," said Molina.

Some of the topics Molina is watching are the climate crisis, economic empowerment and safety.

"People in Honduras, people in El Salvador need to feel reassured and be able to live within their countries, not only subsist economically, but also to be able to raise their families without the threat of being assassinated," Molina said.