More than 100 who have been arrested were from outside Kenosha: police
WLS
KENOSHA, Wisconsin -- Some residents in Kenosha fear a planned visit by President Donald Trump after unrest over the police shooting of Jacob Blake may stir more emotions and cause more violence and destruction in the divided southeastern Wisconsin city after several days of peace.

Trump was scheduled to tour the damage Tuesday and meet with law enforcement as demonstrators call for the officer who shot Blake to be fired and face attempted murder charges.

On Sunday, Wisconsin Gov. Tony Evers sent a letter to President Trump to ask him to reconsider his upcoming trip to Kenosha.

"I write today to respectfully ask you to reconsider," Evers said.

Evers went on to acknowledge the toll that both the ongoing racial tension and COVID-19 pandemic has taken on his state.

"Moreover, as the Kenosha community continues their recovery efforts, I am likewise concerned that an in-person visit from you will require a massive re-direction of these resources to support your visit at a time when it is critical that we continue to remain focused on keeping the people of Kenosha safe and supporting the community's response," he said.

But Kenosha County Board of Supervisors also wrote to Trump, urging him not to cancel.

"Kenoshans are hurting and looking for leadership, and your leadership in this time of crisis is greatly appreciated by those devastated by the violence in Kenosha," the letter from seven supervisors said.

Trump showed no signs of backing down, tweeting about the unrest in Kenosha and saying, " I will see you on Tuesday!"

"We're looking at it very, very carefully," Trump said when asked Saturday about Kyle Rittenhouse, the teen who has been charged with fatally shooting two protesters and wounding a third after he traveled to Kenosha, apparently to defend the city from protesters.

Prosecutors on Thursday charged 17-year-old Kyle Rittenhouse in the fatal shooting of two protesters and the wounding of a third in Kenosha, Wisconsin, during a night of unrest following the police shooting of Jacob Blake.

Attorneys representing Rittenhouse, who was seen walking with an assault-style rifle, have said he acted in self-defense

The tension began Aug. 23 after a video showed a Kenosha police officer shooting Blake, a Black man, in the back while responding to a call about a domestic dispute. All last week, Black Lives Matter protesters held events to call for changes to policing, and Democratic Gov. Evers called a special session of the Wisconsin Legislature to take up a host of police reform measures. Republicans don't plan to take immediate action.

Volunteers and businesses on Sunday worked to clean up from fires and vandalism that destroyed buildings and prompted surviving restaurants, grocery stores, and barbershops to board up.

Kenosha police said Sunday that they had arrested 175 people since the protests began in the bedroom community between Chicago and Milwaukee. Of those, 102 were from outside Kenosha, including 44 different cities.

Many arrests were for curfew violations, and included possible charges for burglary, possession of illegal drugs and carrying concealed weapons without a permit, officials said. More than 20 firearms had been seized.

Family members say Blake, 29, is paralyzed, and a lawyer said most of his colon and small intestines were removed. His family led a large peaceful protest Saturday, just before Trump announced his plans to visit.

Many Kenosha residents said the president should not visit, as well.

"Since Tuesday, it's been peaceful. I feel like him coming here, he is going to create a lot of division again," Kenosha resident Azalea Paredes said.

A 17-year-old suspect is in custody in Illinois after a shooting during protests in Kenosha left two people dead and one injured, the ABC7 I-Team confirms.

"I hate to say it, but I think it is going to be a bad move on his part," said William Morgan, another Kenosha resident.

"When he is here, he is going to hear from us," said Lakeisha Jenkins, also a Kenosha resident.

On Sunday, a group of about 100 police supporters gathered downtown for a "back the blue" rally. That was a fraction of the size of a Saturday protest against police violence that attracted about 1,000 people.

Prosecutors charged a 17-year-old from Illinois in the fatal shooting of two protesters in Kenosha, Wisconsin.

Also Sunday, some Trump supporters walked by burned buildings and shouted that the Black Lives Matter movement was a "terrorist organization."

Oscar Escobar, 41, a Kenosha resident who owns a moving company and co-owns a bar and grill, said he doesn't align with either Democrats or Republicans. He said it's good that Trump plans to visit.

"I think it's a great thing for him to show that he cares about what's happening here in Kenosha and not turning his back on us and just leaving us alone," Escobar said.

At a rally on Sunday, Rev. Jesse Jackson called for protestors in Kenosha to take the day off on Tuesday.

Rev. Jesse Jackson says President Trump is coming to Kenosha on Tuesday to put on a show & film a political commercial.

"Trump is coming to town to do a commercial. He needs a big confrontation," Jackson said. "We must not use this moment to embarrass ourselves in some for of violence. Non-violence is good- violence is destructive."

Rev. Jesse Jackson is also back in Kenosha.

Jackson spoke with community members about the changes that need to be made in Kenosha and across the country. @ABC7Chicago #Kenosha pic.twitter.com/OLVjirYo9P

Trump's SCOTUS shortlist: What to know about Allison Jones Rushing 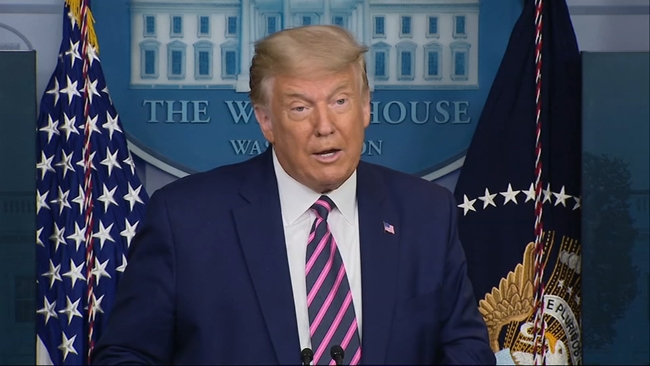