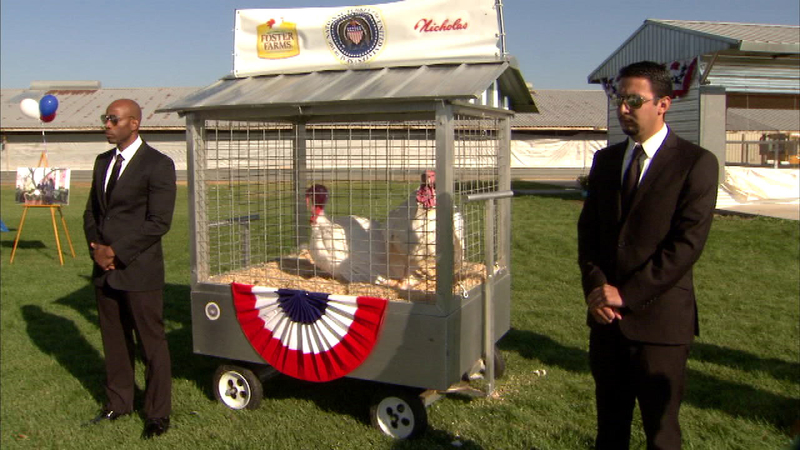 National turkey hails from the Valley

MERCED, Calif. -- Thanksgiving is just one week away and this year the celebration at the White House will hold special significance for California's Central Valley.

The turkey to be granted a presidential pardon was born and raised in Modesto.

For the second time in five years, Foster Farms will provide the national turkey.

It added security detail -- men in suits wearing sunglasses -- for the final 12 turkey walk-off. Turkey "historian" Ira Brill explained, "These guys are not really Secret Service, but we like to have fun with it."

And the national turkey seal did resemble the presidential seal.

It was a beauty pageant for these birds. The turkeys were judged in part in the "three p's" - plumage, posture, and personality. Kids from Eisenhut Elementary School got the Nicholas broad breasted white turkeys to walk the walk and talk the talk. But the ability to sit still earned turkeys extra points. National Turkey Federation chair Jihad Douglas said, "As you know at the White House they will sit on a table and we want someone behavioral wise who is willing to do that."

In the end Tom 1 and Tom 2 -- the valuable alternate -- were selected. Turkeys don't fly, but these two will take flight aboard a United jet dubbed "Turkey One" on Monday.

Tom 1 had his day in the sun as he strutted and puffed himself up in front of his fans. Foster Farms director of live production Kirk Lippincott marveled, "They are bred to do this, but to attract a female, not us, and to get a bird with this large of a crowd that they're not used to, to do that is pretty special."

Only tom turkeys -- males -- are considered for the Washington DC trip. The females just aren't as friendly. Hedden said, "They don't respond to sound and they're just not as playful. They're a little bit more serious."

President Barack Obama is expected to spare Tom 1's life on Wednesday. He'll have a real name by then. Lippincott said, "To know that this bird is going to Washington DC next week wow, what an opportunity. Opportunity of a lifetime."

The pardoned poultry will spend the rest of their days at a Virginia estate. They won't be gobbled up this Thanksgiving.