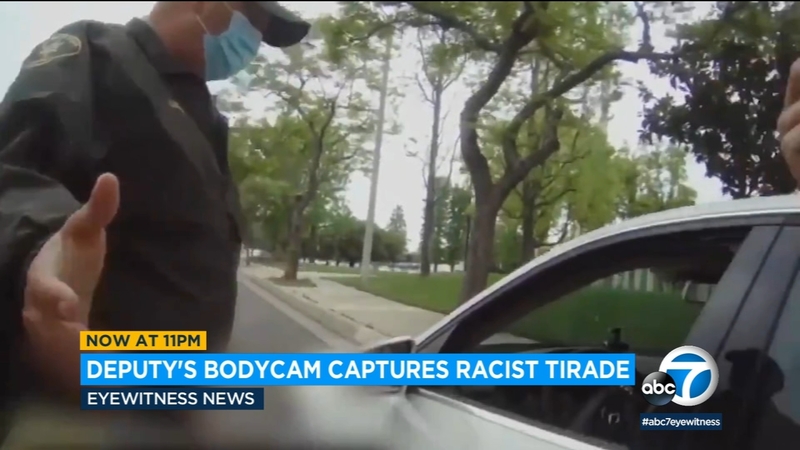 In the video, the woman is heard telling the deputy, "You're always going to be a Mexican. You'll never be white, you know that, right?"

"You'll never be white, which is what you really want to be," she says after signing a citation. "You want to be white."

The bodycam video of the traffic stop is now the subject of a sheriff's department investigation.

The incident happened when a sheriff's deputy pulled over a white Mercedes-Benz after deputies say they spotted the driver on her cellphone.

As the deputy approaches the vehicle, the driver has her cellphone out and is recording.

The interaction quickly turns confrontational as the driver questions the deputy's motives for the stop and accuses him of trying to murder her.

Before the deputy explains why she was pulled over, the woman interrupts him.

"Yes, I started to record because you're a murderer," she says.

The deputy tells the woman she can't be using her cellphone while driving and the woman responds by saying she was recording because the deputy scared her.

"You're threatening to kill me and my son," she says at one point in the encounter.

She says her driver's license was at her apartment when the deputy asked for it.

The deputy eventually tells the woman that she too is being recorded since he was wearing a body camera.

The L.A. County Sheriff's Department is in the midst of rolling out bodycams to all its deputies, but the deputy in the video hasn't received one and is using a personal bodycam.

Another deputy arrives on the scene to help diffuse the situation and the woman then hurls racist insults.

"Here you go Mexican racist," she says as she returns a pen to the deputy after signing a citation.

She goes on to tell him, "You're always going to be a Mexican. You'll never be white, you know that, right?"

"This Deputy exemplifies the core values of our Department, his demeanor during this traffic stop is just an example of professionalism and patience our @LASDHQ Deputies have," he tweeted.