The Rams took control early and never looked back Sunday, rolling over the Philadelphia Eagles with a 37-19 win.
KABC 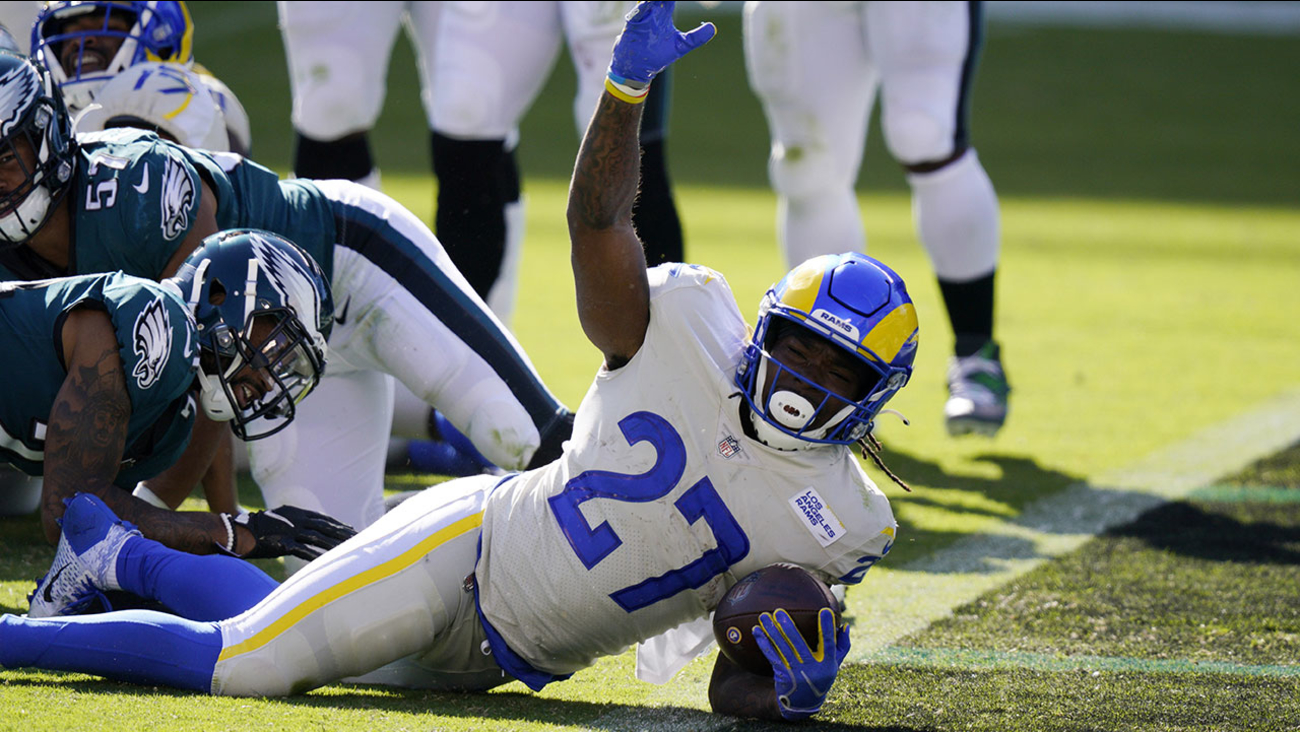 Rams running back Darrell Henderson scores during the second half of the game against the Eagles in Philadelphia on Sunday, Sept. 20, 2020.

Goff completed his first 13 passes, including a pair of TDs to Higbee, and the Rams jumped to a 21-3 lead minutes into the second quarter.

Goff and Carson Wentz were selected Nos. 1-2 in the 2016 draft, one of seven times since 1967 that quarterbacks were the first two picks. In their only other head-to-head meeting in December 2017, Wentz tore two knee ligaments. Nick Foles stepped in and eventually led Philadelphia to its first Super Bowl title.

Darrell Henderson ran for 81 yards and had his first career TD run. The Rams gained 449 total yards, including 191 on the ground. Higbee had three TD catches all of last season on 69 receptions.

The Rams took a 7-0 lead on Goff's 4-yard TD pass to Higbee after Miles Sanders' fumble on the third play gave them the ball at the Eagles 41.

Robert Woods ran in from the 5 on a perfectly executed end-around following a fake hand-off up the middle to make it 14-3.

But the Eagles answered with a 1-yard sneak by Wentz and 5-yard TD run by Sanders to get within 21-16 at halftime.

Cooper Kupp's decision to field a punt at the 4 with under a minute left in the first half backfired when T.J. Edwards knocked the ball loose and the Eagles recovered at the Rams 11. Sanders scored a few plays later.

The Eagles were driving on their first possession of the third quarter but Darious Williams made a diving interception in the end zone on Wentz's pass to J.J. Arcega-Whiteside.

After Wentz was sacked eight times at Washington last week, Aaron Donald and the Rams were held to no sacks. It didn't matter on the scoreboard.

Second-round pick Jalen Hurts, the runner-up for the Heisman Trophy last season, made his debut for the Eagles and lined up in a two-back set in the backfield as Wentz completed a 10-yard pass to Dallas Goedert to the Rams 8 on Philadelphia's first drive. Hurts also lined up as a receiver a few times.

Both teams scurried to line up near midfield and lock arms in a sign of unity about 25 minutes before kickoff while Alicia Keys performed "Lift Every Voice and Sing" in a video designed to address racial inequality. It appeared there was no announcement the song was going to be played and players weren't aware it had started.

Several players from both teams either took a knee or stood with a fist raised during "The Star-Spangled Banner."