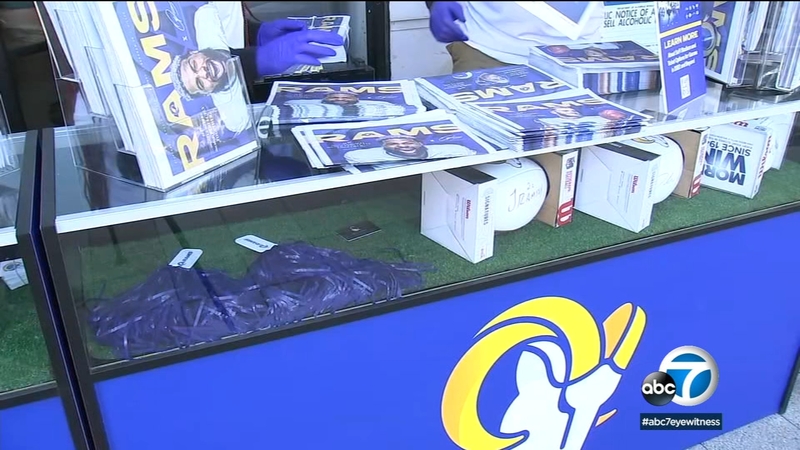 INGLEWOOD, Calif. (KABC) -- As the playoff game between the Rams and the Tampa Buccaneers approaches this Sunday, the team was in the community on Friday trying to get Rams fans excited.

And what better way to do that than with free goodies?

The team calls it the Los Angeles Rams Newsstand. They set one up at Inglewood coffee shop Sip & Sonder, and another at the 3rd Street Promenade in Santa Monica.

"We know there's a lot of Rams fans in Inglewood and L.A., and so we're really excited just to be able to meet people and get excited for this game," said Madison, a Rams cheerleader, who didn't share her last name.

The Rams Newsstands will be available for fans on Saturday too. Fans who stop by the pop-up newsstands receive autographed mini helmets and footballs, rally towels, posters, pom-poms and more. There's also special exclusive gear for season ticket members.

The Buccaneers host the Rams in the NFC divisional round Sunday, looking to avenge a pair of losses to the only team they've played but yet to beat since Tom Brady joined the Bucs in 2020.

"It's awesome because we didn't have football for a long time and they're finally back and it's awesome," said Rams fan Timothy Martinez. "My kids get to grow up with football."

Not only does this get fans pumped about the Rams playoff run, but it also drives customers to local businesses.

And the excitement isn't just in Los Angeles. Rams fans like Ana and Dean McCarthy are making their way to Tampa Bay to represent their team.


The Rams Newsstands will be available to fans on Saturday too. The Rams are also supporting six different watch parties around Southern California; more details about those can be found at therams.com.