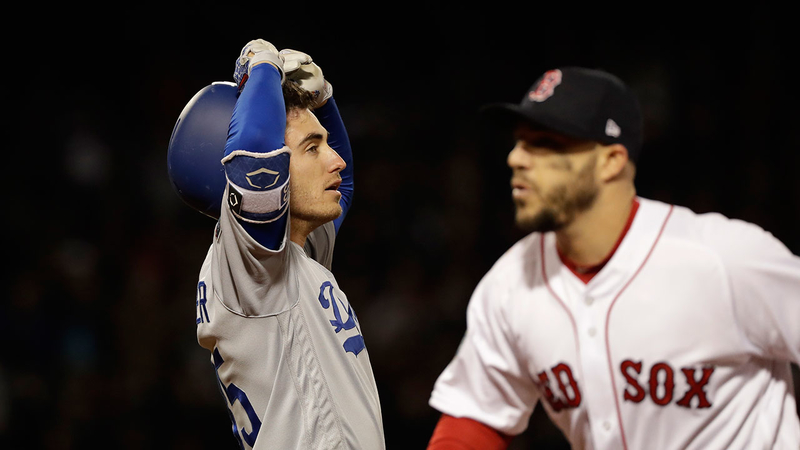 NEW YORK -- The Boston Red Sox escaped severe penalties in Major League Baseball's cheating investigation on Wednesday, with Commissioner Rob Manfred concluding that the 2018 World Series champions' sign-stealing efforts were less egregious than the Astros' when they won it all the previous season.

In a statement, Cora said he was "relieved'' the investigations were finished and that Manfred found he "did not violate any MLB rules as a member of the Red Sox organization in 2018 or 2019."

"I also take full responsibility for the role I played, along with others, in the Astros' violations of MLB rules in 2017," Cora said. "The collective conduct of the Astros organization in 2017 was unacceptable and I respect and accept the Commissioner's discipline for my past actions."

The Red Sox upgraded the status of Ron Roenicke, who had been their interim manager pending the outcome of the investigation.

The only member of the Red Sox organization who was penalized was replay system operator J.T. Watkins, who was suspended without pay for a year for violating the prohibition on in-game use of video to identify pitch signals. Watkins, who denied the allegations, was also prohibited from serving as the replay room operator through 2021.

Boston was also stripped of its second-round pick in this year's amateur draft, No 52 overall.

"To be clear, we're not taking any victory laps. A violation was uncovered and that was wrong and we're being punished for it," Red Sox president Sam Kennedy said on a conference call with reporters, while acknowledging relief that the months-long investigation is over.

"We have to earn back trust, and we're prepared to do that," Kennedy said, adding that the team's owners apologized to their counterparts on a conference call that afternoon. "We recognize that as an organization."

Both Bloom and Kennedy dismissed suggestions that Cora could be welcomed back - especially if the coronavirus pandemic wipes out the entire 2020 season. Roenicke, who was hired on the eve of spring training after a shotgun job search, is signed only for one year.

Manfred said in his report that Boston's misdeeds were limited to the regular season and not as pervasive as the Astros', who repeatedly used a video camera in the outfield to steal catchers' signs during their run to the 2017 championship and again the following season.

Manager AJ Hinch and general manager Jeff Luhnow were suspended through the 2020 postseason on Jan. 13 and fired that day by the Astros. Houston was fined $5 million, the maximum under the Major League Constitution, and lost its next two first- and second-round amateur draft selections.

"Unlike the Houston Astros' 2017 conduct, in which players communicated to the batter from the dugout area in real time the precise type of pitch about to be thrown, Watkins' conduct, by its very nature, was far more limited in scope and impact," Manfred wrote.

A 30-year-old from Tuscaloosa, Alabama, Watkins is a 2012 graduate of the U.S. Military Academy. The catcher was selected by Boston in the 10th round of that year's amateur draft and played in the Red Sox system until 2015. He declined comment, the Red Sox said.

Watkins compiled advance scouting information, and part of his job was to decode opposing pitchers' sequences ahead of series. Manfred called him a "key participant" in the 2017 Apple Watch incident, saying he relayed decoded signs from Boston's replay room to the dugout, at first with a runner and then with the watch to an athletic trainer.

MLB said it interviewed 65 people, including 34 past and present Boston players. Manfred concluded Cora did not know of Watkins' conduct but "did not effectively communicate to Red Sox players the sign-stealing rules."

In his statement, Cora said: "I am grateful for the Commissioner's thoughtful and thorough investigation relating to my conduct as Red Sox manager."

An infielder on Boston's 2007 champions, Cora was mentioned 11 times in Manfred's decision on the Astros, which said he developed the cheating system. Cora left Houston to become Boston's manager after the 2017 season and led the Red Sox to a franchise-record 108 regular-season wins and the World Series title.

Beltrán, the senior player on the 2017 Astros, was the only player identified by MLB as participating in the scheme to place a monitor near Houston's dugout to receive video from the outfield and have players bang on a trash can to signal breaking pitches.

Red Sox players were promised immunity in MLB's investigation, but Manfred said even if players had been subject to discipline, none would have been punished.

Watkins denied any wrongdoing, telling MLB that any information he provided during games was obtained from advance scouting.
Manfred was unconvinced.

"Watkins did not provide a persuasive explanation for why the information he provided to players during the game differed from information provided prior to the game," the commissioner wrote. "I am significantly troubled by Watkins' admissions that he knowingly attempted to conceal his communications with players from the video room monitor."
Report a correction or typo
Related topics:
sportsmassachusettslos angelescheatingworld serieslos angeles dodgersboston red sox
Copyright © 2022 by The Associated Press. All Rights Reserved.
TOP STORIES
Kidnapped SoCal teen found in NY thanks to quick-thinking detective
FTC warns about baby formula scams on the rise amid shortage
16-year-old girl stabbed by classmate in Montclair, police say
$45,000 reward offered in case of teen killed in Inglewood shooting
Controversy surrounds Villanueva over campaign ad filmed in church
House passes terrorism bill after shooting in Buffalo, New York
More than 50 brown pelicans found injured, sick or starving in SoCal
Show More
LAUSD gets more than $44M in grant funds for under-resourced campuses
Norwalk teacher arrested for allegedly sexually abusing 2 students
Alleged gunman sent diary to newspaper before OC church attack
What is monkeypox? What to know after US confirms 1st 2022 case
SoCal: Public warned of unlicensed COVID testing sites as cases rise
More TOP STORIES News