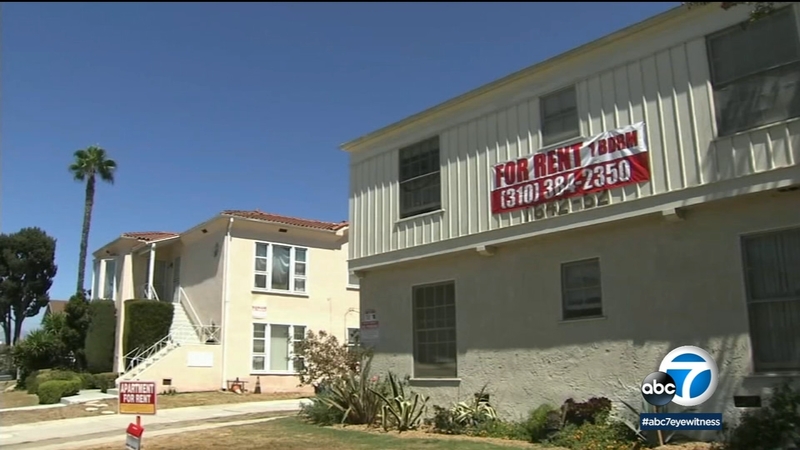 LOS ANGELES (KABC) -- Nearly 60% of Los Angeles residents live in rental housing and in the last decade, rents in the city have skyrocketed.

A new study from Rentcafe found L.A. rents went up 65% since 2010. That's well above the national average for the last decade which is 36%.

"It's sad and when you see the faces of people who receive these large increases, rent increases from $2,000 to $3,000 a month and you know they can't afford it the next month. You know they're looking at their car as their only housing choice and sometimes the streets as well," said Chancela Al-Mansour, the Executive Director of the Housing Rights Center. The non-profit organization investigates cases of housing discrimination..

So, what's the cause?

More people are renting in the 10 years since the foreclosure crisis.

"In the last two years, especially when the rent controlled measures were being proposed and a lot of the landlords were taking advantage of the situation and really increased rent substantially...in some cases they doubled and tripled the rents in anticipation that maybe they wouldn't be able to raise rents so much in the future. Vacancy rates are really low which means there's not a lot of available housing stock out there for renters. Also, most average incomes have not gone up," said Al-Mansour.

All of this has contributed to the homeless crisis.

"You have homeless encampments in front of $5 million houses. Those houses then sit on the market for six or seven months and have to reduce their price.

The collateral effect of lack of affordable housing or lack of homeless housing is effecting the high-end market so everyone loses," said Shaun Alan-lee, the Estates Director at Compass Los Angeles.

A number of laws take effect Jan. 1 that will help tenants and could slow rising rents.