She claims the sheriff "lied and framed" her and a former assistant sheriff to make it look like they were behind a cover-up.
KABC
By Coleen Sullivan and Lisa Bartley 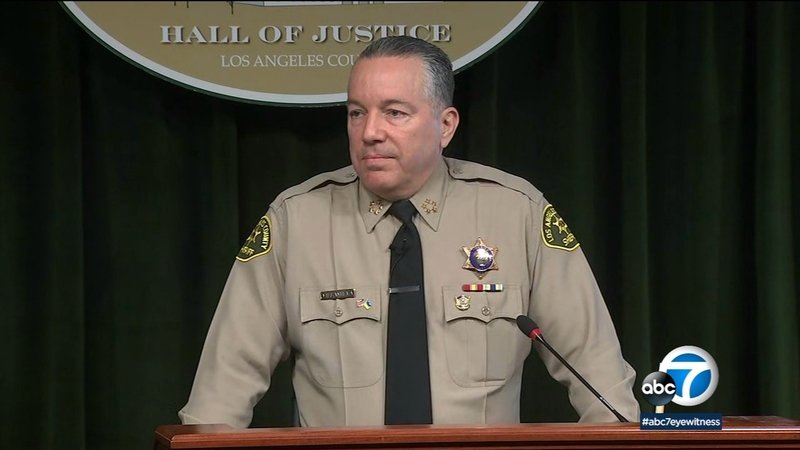 Haselrig, a 34-year veteran of the department, is the third high-ranking LASD executive to file a legal claim saying that Villanueva tried to cover up a controversial use-of-force incident from March 2021 and is the fourth LASD executive to claim knowledge of Villanueva's alleged role in the cover-up.

Video of the incident was first obtained by the Los Angeles Times and later obtained by Eyewitness News and other media outlets.

It shows Dep. Douglas Johnson kneeling on a hand-cuffed inmate's head and neck for more than three minutes, even after he'd stopped resisting.

"Chief Haselrig is a whistleblower who was retaliated against, had her career destroyed by this man," said Vincent Miller, Haselrig's attorney, referring to Villanueva.

An internal report previously obtained by Eyewitness News said LASD buried the case because of its similarities to the killing of George Floyd in 2020 by former Minneapolis police officer Derek Chauvin.

In her legal claim, which is a precursor to a lawsuit, Haselrig said Villanueva "maliciously lied and framed" her and former Assistant Sheriff Robin Limon to make it look like "they had done the cover up instead of the sheriff."

Haselrig said she gave the video to Limon around March 15, 2021 and that Limon said "she was heading immediately from there to Villanueva's office to show him the video."

"The same day, Limon confirmed to the complainant that she watched the video with Villanueva and that he agreed the force looked troubling and that he would 'handle it,'" Haselrig's claim stated.

All three have filed legal claims against the department alleging retaliation.

"They also confirm that Sheriff Villanueva saw the video within a few days of the incident, and he is now lying about it. He keeps changing his story," said Miller.

At a press conference on Wednesday, Villanueva once again denied that he knew anything about the use of force until November 18, about eight months after it occurred.

A reporter asked if Villanueva was still saying he had no knowledge of the incident until November 2021.

"Our information is very solid and we're very comfortable with it," Villanueva responded.

The sheriff claims this is "dirty politics" and that it's an attempt to smear him ahead of next month's primary election for sheriff.

"We have to put this in campaign context," Villanueva said on Wednesday. "When this was released at the end of March, it was done for political purposes only, nothing else. We're going to defend all three of these cases very vigorously in court."

Miller said his clients want the FBI, the California Attorney General's Office and the L.A. County District Attorney's Office to step in and investigate.

"This has reached a boiling point in the sheriff's department," said Miller. "There's a cauldron that's ready to spill over with one whistleblower after another stepping up. This is not going to stop."