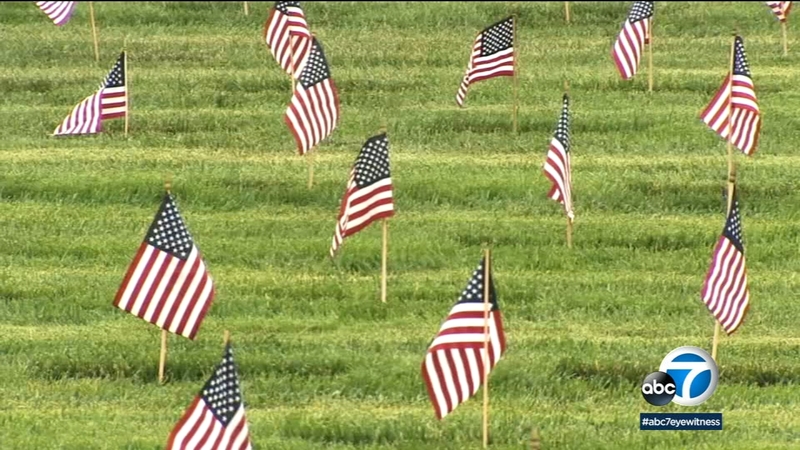 RIVERSIDE, Calif. (CNS) -- A Memorial Day weekend ceremony that involves placing miniature American flags at every grave on the grounds of Riverside National Cemetery in veneration of those who served in defense of the United States was being held Saturday.

The "Flag for Every Hero" event got underway at 8 a.m. at the cemetery's Memorial Amphitheater, where two to three hundred volunteers were expected to fan out on a mission to ensure the Stars & Stripes wave alongside all of the final resting places.

"This is the 10th anniversary of the 'Flag for Every Hero' program, and I hope to have a big turnout to honor and remember all the service members who have paid the ultimate sacrifice for this great country," said Brennan Leininger with the nonprofit Honoring Our Fallen. "We have a big responsibility in filling Riverside National Cemetery with flags."

The flag walks, first organized in 2012, are conducted not only on Memorial Day weekend, but also on Veterans Day. Both were nixed in 2020 because of the coronavirus public health lockdowns. The Memorial Day mission was authorized last year, but the Veterans Day outing in November was almost derailed because of a general order prohibiting large gatherings on federal properties.

Lobbying by Riverside National Cemetery managers put the operation back on track, and it went forward, with limitations on "platoon" sizes designated for each section of the cemetery.

There are no limitations on the walk now, but in a message to participants, Leininger cautioned that "(burial) services will be taking place," so it was important for everyone to remain quiet and "respectful."

When they began in 2012, participants were able to reach only 21,000 of the more than 200,000 grave sites. In 2014, organizers were able to procure enough flags and enlist a sufficient number of people to plant the Stars & Stripes next to just about all of the final resting places.

Since then, the number of volunteers has grown, and the flags are placed at every grave within about three hours, according to Leininger.

The honorably discharged U.S. Air Force serviceman, now an Anaheim police officer, visited the cemetery in 2011 and was dismayed by how few flags were flying, prompting him to start the placements, with the help of Cypress-based Honoring Our Fallen.

Eventually, Leininger's group joined with Riverside resident Mary Ellen Gruendyke, now in her late 70s, to ensure all graves received a flag. Gruendyke had contributed money and time to the effort long before 2012. The 900-acre national cemetery is the fourth-largest of its kind in the nation -- and running out of space.