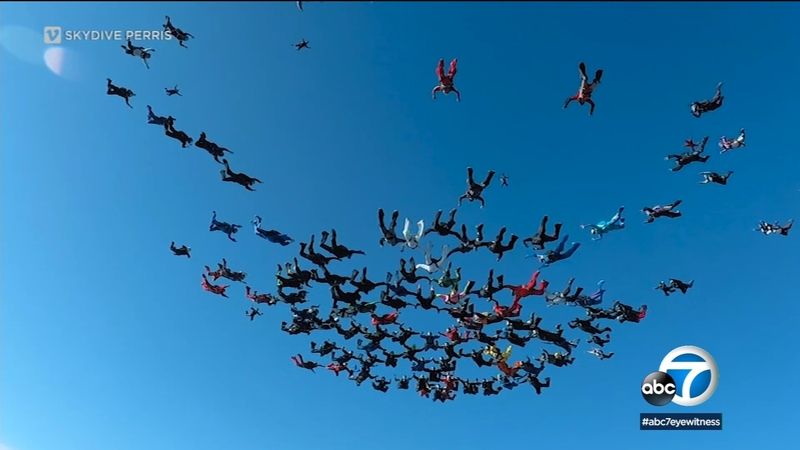 Over 100 senior citizens board plane hoping to set skydiving record

PERRIS, Calif. (KABC) -- More than 100 skydivers from across the globe, all at least 60 years old, gathered in Riverside County Sunday to achieve a world record.

They boarded planes in Perris and took off in the hopes of setting a world record.

"First of all, this is a world record and we were hand-selected to be here, said Rick Poplinger, 68. "Because we're among the jumpers that have shown that we're pretty adept at doing what we do,"

The group "Skydivers Over Sixty," or SOS, performed the largest freefall formation with 107 senior citizens whose ages range from 60 to 78.

This group proved that it's never too late to enjoy a thrill ride.

"Just because you are over 60 doesn't mean you have to sit down and not participate in activities," said Fredrick Winsser, 75. "There's all kinds of possibilities you can do. I scuba dive as well, I used to ski, skydiving is the cats meow."

"There's a very pre-determined, particular formation, and we have to build exactly that formation that we've designed," said Dan Brodsky-Chenfield, president of Skydivers Over Sixty.

They get only one minute to pull it all off, and it's a job they take seriously.

"I think more of it is to focus on doing your job in the formation and not be too concerned about what is going on around you," said Jean Szkaradek, 64. "And what everyone else is doing."

After four days of preparation, and six prior jumps, the seventh one was close to setting the world record.

"The formation built perfectly. It was just one person that was out," explained Brodsky-Chenfield. "And that's the trick of doing large formations, is that all 107 people have to have a perfect minute at the same minute."

In the end, the skydivers were unable to achieve the record Sunday, partly due to uncooperative weather, which canceled several attempts.